How can I coordinate updating multiple Aggregates as a result of one command, without introducing exploitative possibilities?

I'm trying to figure out how to integrate one command that updates multiple Aggregates in different contexts in a video game. The components/considerations for my particular design are DDD, CQRS, Ports and Adapters, Event-Driven Architecture, Aggregate+Event Sourcing, and Entity-Component-System. It's a lot to manage, but there are a few cases that can simplify quite a number of the friction points. 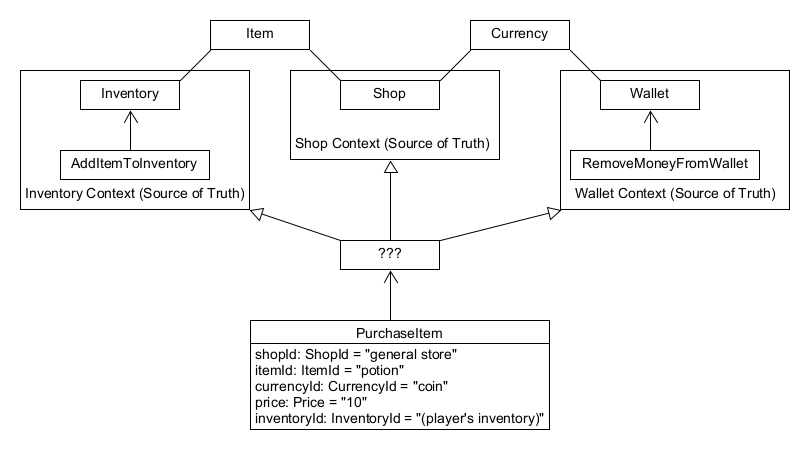 This diagram kind of illustrates what I'm working with. I have 5 different models, Inventory, Item, Shop, Currency, and Wallet. This is a collaborative, disconnected environment. What I mean by that is, each of these models is designed to not necessarily know about each other, except when necessary. I want these models to be reusable, by unknown third-parties, resulting in other compositions, aside from the ones that I can think of, or the one I'll talk about here.

Items can be added to a specific Inventory by using an AddItemToInventory command. Money can be removed from a specific Wallet by using a RemoveMoneyFromWallet command.

When a Player wants to buy an Item from a Shop, they select the given Item, and if they have enough of the specified type of money in their Wallet, they confirm they want to buy it. At that point, the money is removed from their Wallet, and the specified Item is added to their Inventory.

Because this is in a video game, I don't want to create places where duplication can occur. There are two particular cases I want to avoid.

I've been trying to figure out how I can avoid these particular issues. My initial thinking was that this would be managed in a single transaction. The problem though is that these are in different models, different contexts, different Aggregates. Because they are different Aggregates, they shouldn't be updated in the same transaction. Other Aggregates could be updated asynchronously, in my case via published Domain Events. But because they're updated asynchronously, that still leaves open the problems, where items are given, but money isn't taken, or money is taken, and items aren't given.

In the diagram, I have the PurchaseItem command going into a ??? component. I don't know what it's supposed to be. I didn't want it to be given to the Shop Aggregate, because then the Shop context would have to know about Inventories and Wallets. It knows about Items and Currencies, but it feels improper for it to also know about Inventories and Wallets. The Shop should work in exactly the same way, whether the Item is added to an Inventory, and funds removed from a Wallet; or if the Item is added to a Package, and funds removed in one batch at the end of the day from a Customer Account, or any other combination of things.

Or, maybe it's acceptable to create a new Aggregate, in a different context, which uses the same Entities and Value Objects of these other contexts. But these other contexts would still own their own data, so it would still be Eventually Consistent. I read in Implementing Domain-Driven Design about a bargain basement Domain Model, where three separate models were used, and a question was posed about whether it makes sense to introduce a new model for the interaction. My problem with that approach is that I still need these other contexts to exist as they are, because third-party developers will use them for completely different purposes. Using Items for Equipment, Money for Quest Rewards, In-game and out-of-game Shops. So I can't just condense these all into a single model, without also forcing those developers to NOT use most of the model that's available.

Additionally, all Aggregates in my design are sourced from Events. On the development side, the game developer will create a new Item by assigning a new Item Id. This gets recorded in the game files as an ItemIdAssigned event. Same thing for Currency, Shop, Wallet, Inventory, etc. But once these things are created on the developer side, they're interacted with in completely different ways by the Player. A developer can add an Item to a Shop, a Player can't. A Player can buy an Item from a Shop, a developer can't. This also indicates to me that there are different Aggregates that are at play here that I can't identify. Ones that may be sourced from all, or part, of a different Aggregate's Event Stream. Or that these Aggregates are missing functionality that I haven't been able to understand it's place.

How can I model this?

This answer is based on the presumtion that this is not a hobby project: Probably that is not what you want to hear , but trying to go at the same time DDD, CQRS, Event Driven Architecture, Event sourcing sounds like a bit of big bite that will lead, either to nowhere, or to a very overengeneered system. If it is a hobby project put it in the description so I will try to answer it. Otherwise my answer is re-think the architecture to have less amount of Buzz words.

I was part once of a project that was trying to utilize at the same time: TDD,CQRS,Event Driven architecture,Behaviour testing and Domain Driven Design and microservice architecture. A project that normaly should take months was year and half in development without visible end because of the added complexity of the different architecture.

I find CQRS one of the main sources of overengeneering. I think majority of developers understand very literaly that there MUST BE one read store and one write store which raises multiple problems related to synchronization of two stores. While I have personaly thought that the main principle of CQRS is that you have two different channels and if you actualy have 1 read and 1 write stor or read and write store are the same. As long as you have 2 separate channels all is good.

There is good news, bad news, and more good news.

The good news is that this is a solved problem! You have found yourself in the exact space that every ATM in the world needs to navigate before dispensing money.

The bad news is that the infrastructure and complexity necessary to mediate this kind of distributed transaction is considerable (and not perfect!). This is a pretty good summary of how they work: How are transactions on ATMs and their banks typically synchronized?

The final bit of good news is that you do not need to go the above route (and if/when you do reach that point, it will be a good problem to have). How much easier would it be if you just locked and updated your data in a single transaction? I urge you to make a list of the pros and cons. You will find that the only real issue with a single transaction is that it limits availability. Are you having problems with availability?

DDD has nothing to say about database transactions. The boundaries around aggregates are logical boundaries. This is often a point of confusion. DDD doesn't mandate eventual consistency.

Create a new entity called "Transaction" or "Purchase." Each instance of this entity records the event when a user requested and completed a purchase (Note that "requested" and "completed" are not the same thing).

Not the answer you're looking for? Browse other questions tagged domain-driven-design domain-model cqrs event-sourcing aggregate or ask your own question.

2
How are transactions on ATMs and their banks typically synchronized?

2
Cascading deletes from an aggregate root through out the entire aggregate doesn't make sense
2
Event Sourcing and cross-context aggregate
0
How to transform one aggregate to another in DDD
1
In DDD can an aggregate also just be an entity?
0
How to deal with data that seems to be part of multiple aggregates
4
How can you create two different but linked aggregates without resorting to one transaction?
2
How can we update potentially many Read Model Projections based on an Event that is not within the native context?
1
Can objects outside the Application Layer hold references to Aggregate Roots