Database design to model companies and many roles

I am building an application for employee management. To start discussion, I have 3 roles: admin, manager and employee

I've tried some approaches but I always fall into the same result: null information.

So, based on this scenario, what would be the an approach which avoids these problems?

See my last drawing for the third approach mentioned above: 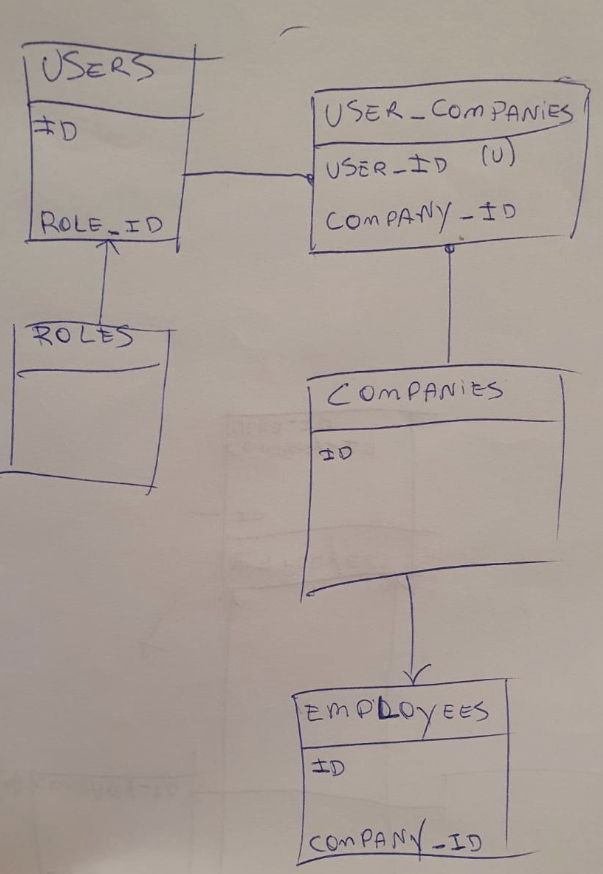 First of all, avoiding NULL values for foreign keys seems like an arbitrary goal. If you follow it through to the extreme, it may lead you to complicated solution without bringing much value.

The other point is that it's often best to keep any role-specific data out of the User data. Users of your system may have account names and passwords, possibly real-life names and contact information, maybe home addresses (although that is already unlikely to matter outside their relationship to their roles within companies).

Roles are the place where you can store information about users that matter within some context, in your case within the context of companies. Users may work for two different companies with different work phone numbers, for example. They might even work for one company as a manager while working as a normal employee for another. So the Role table has a foreign key user_id, a role or function name, and possibly role-specific data. It also has a foreign key to refer to Company, and that's the place where the NOT NULL constraint may be not helpful. The admin role within your system is not bound to a company, only to a user, so restricting the company foreign key to be NOT NULL would force you to represent the admin role using a different mechanism, such as a flag in the User table, or a separate table for admin roles that does not have a company_id foreign key.

What information can be seen and managed by a logged-in user should be completely independent of the table structures. The authorization checking function would take as input the roles that the user has, and the requested functionality, and then return whether the user is allowed to execute that function. The authorization mechanism should not influence the table structure representing your domain data.

Not the answer you're looking for? Browse other questions tagged database database-design relational-database or ask your own question.

3
Database ERD design: 2 types user in one table
23
How would you design a user database with custom fields
3
Database design: manage permissions on multiple applications resources
1
User, user Role and user Info, data base design problem
6
How to simplify this Role and Permission management design?
2
Compromise between formal correctness and convenience in database relations
1
Triangle relationship in database