Can a class contain its own class?

Suppose I have the following class structure: 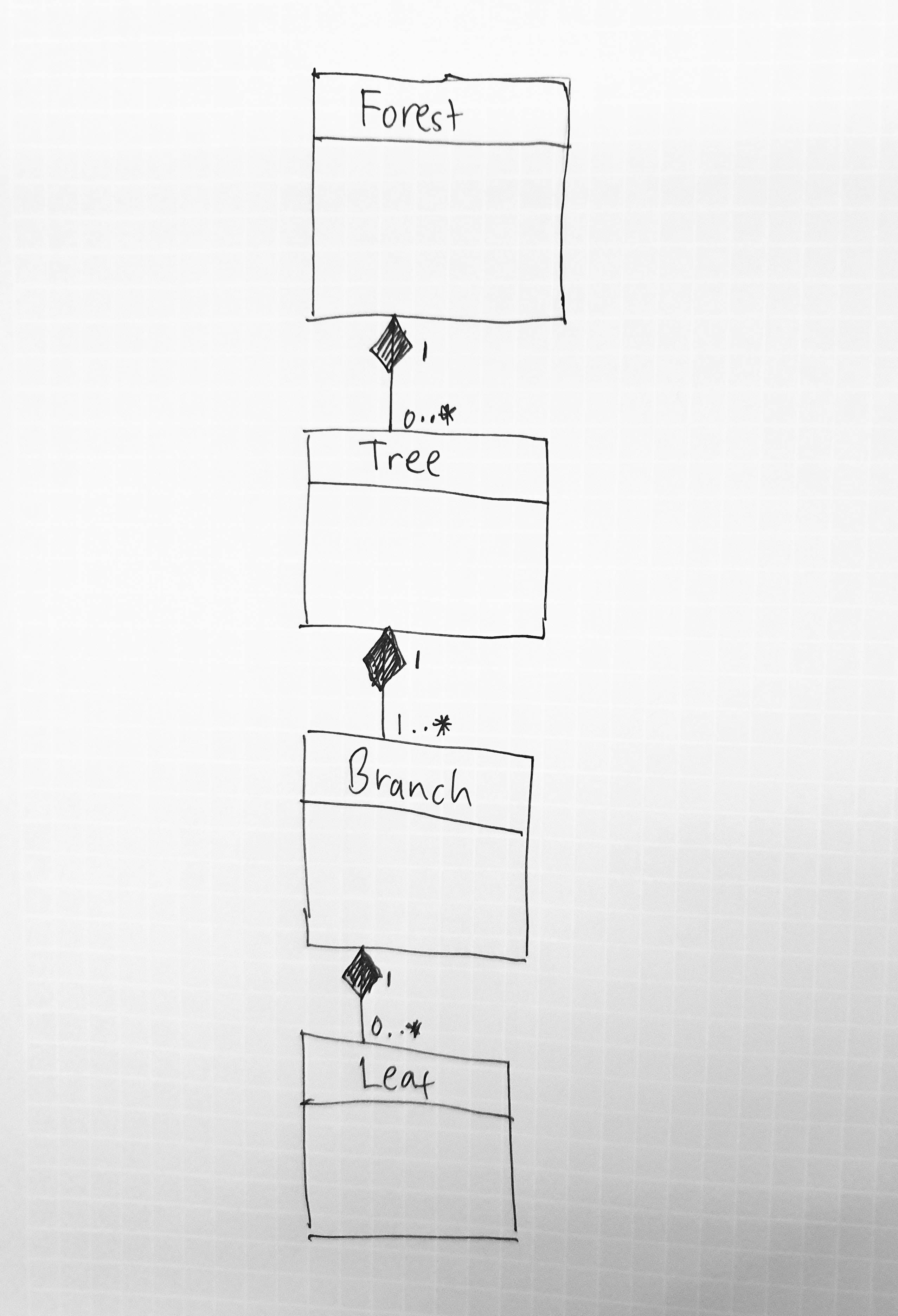 I believe this is a 'composition' structure, where each child depends on its parent for existence. 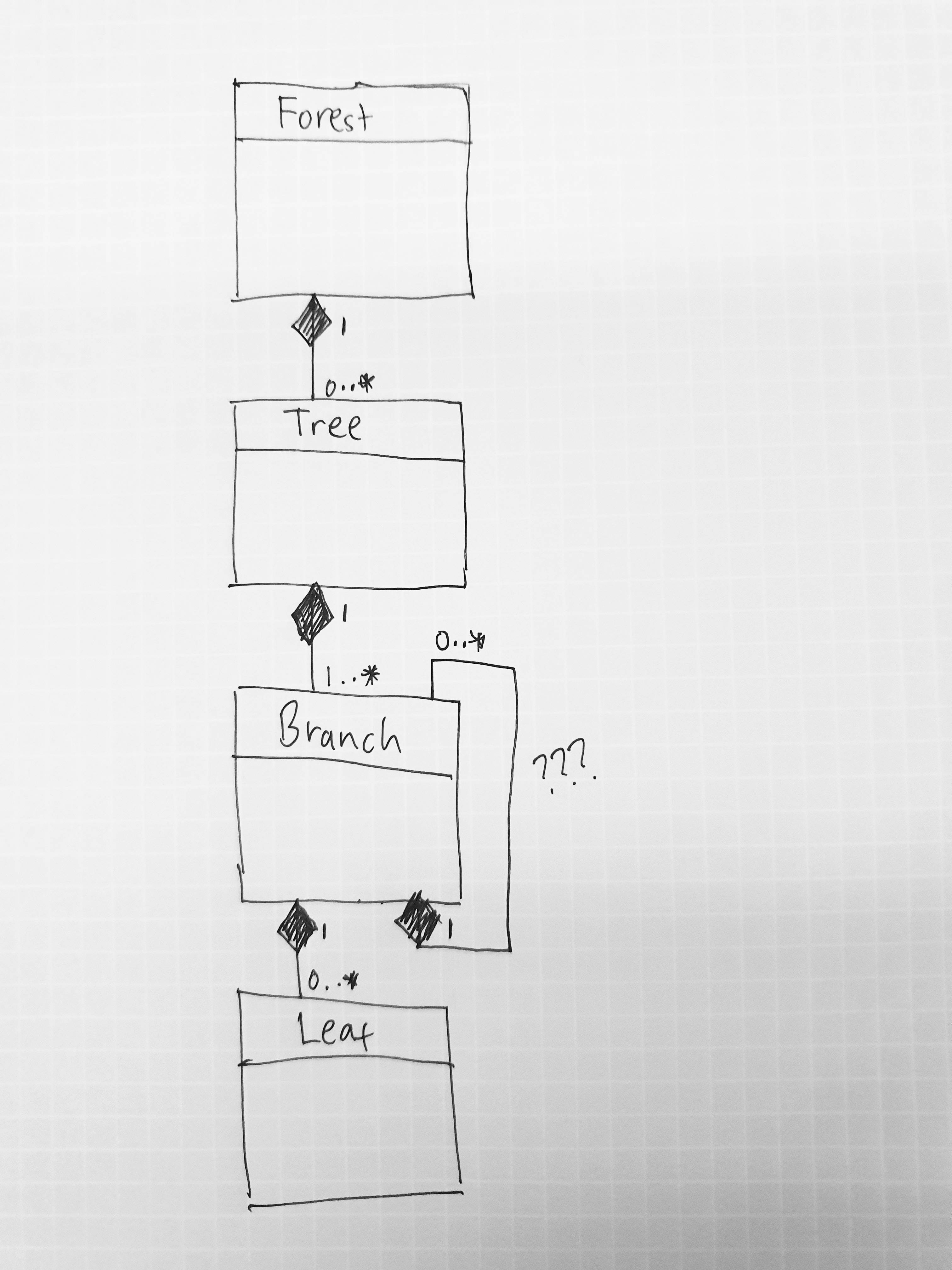 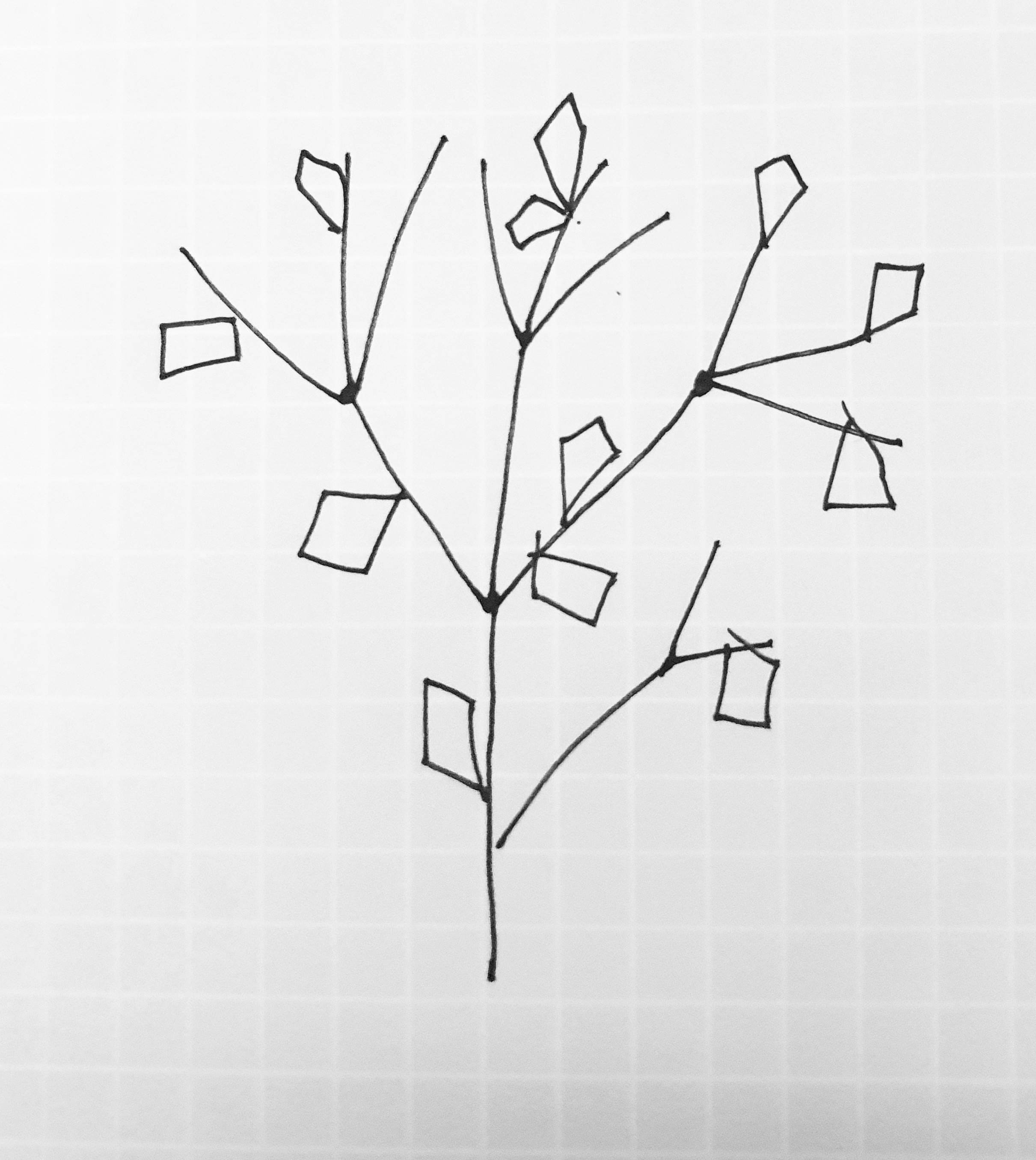 In other words, a simple heirarchy structure, but with a flexible hierarchy depth.

However since the number of 'generations' is unknown, I can't seem to get my head around how this might be represented in a UML Class Diagram, and later implemented.

Can a class contain its own class?

However, a class cannot then have only constructors which require a parameter of the same class, such as

The language allows it, but it's impossible to ever create such an object, as it leads to an infinitely recursing chain of constructors:

Edit: user1937198 correctly pointed out that you can simply pass in null (barring some constraints such as C#'s non-nullable types), but that is in my opinion off-label usage as it's conceptually contradictory to (a) have a constructor ask for an object (b) not provide any constructor which doesn't aks for that object, and then (c) not passing an object.

However, if there are other constructors available as well, then there is no problem. The first created object is simply limited to using the constructors without the same class as constructor parameter

As a general rule, there are three ways to model this relationship:

For reference, what you're looking for here is a 'recursive' structure, as opposed to a 'composite' structure.

This is describing a collection, e.g. List<Branch>. Other collection types exist but I'm using List<> for simplicity's sake.

Therefore, a branch needs to contain such a collection of (child) branches:

This is the child-oriented example from the previous examples.

3 is a logical consequence of 2, so it is automatically achieved when 2 is achieved.

Your UML is perfectly fine in regards to the self-relationship. You drew a relationship from Branch to Branch, which does express it.

This kind of relationship is inherently recursive (i.e. what you call "infinite depth"). It's actually impossible to avoid recursion here, because that would require using multiple types to denote branches that can/can't have further children.

Note that while the relationship itself is inherently recursive, it's possible that your business logic might enforce a maximum depth. Maybe not necessary for your case, but it is a general possibility.
However, that sort of depth-limit is not visible on a UML diagram, and shouldn't particularly be visible as UML diagrams do not contain validation or business logic.

I just want to point out that there are circumstances which can change the outcome.

Note: I'm aware that in your drawing of a tree you drew leaves on all kinds of branches, but I also suspect that your tree scenario is an example and not indicative of what you may be trying to build in reality.

Similarly, your UML is relying on your business logic ensuring that only the ancestor branch is connected to the tree, not any other branch. If you wish to model this more securely, then you would also need to distinguish between a "tree-related branch" and a "branch-related branch".

However, there is some degree of freedom here. You could model that in your UML, but it will complicate the diagram. You could also stick to simple modeling with only a Branch type which could all be related to a tree, child branches, and leaves; and then rely on your business logic to ensure that you build your graph the right way.

This very much depends on whether you're willing to take on the added model complexity in order to outright prevent "bad" graphs, which requires context from how bad an error in your application is.

Besides the already given suggestion to use the composite pattern, I see two ways to fix this model:

The first approach has the advantage that it will make easier to take out a branch with sub-branches from the first tree and move it to anothe tree. But it may be more effort to run an algorithm which does something "for all branches", this will always require a recursive scan.

You didn't. You added a loop. The loop only becomes "infinite" if someone interconnects the objects in a cyclic way.

I can't seem to get my head around how this might be later implemented.

Here is a very simplistic implementation in C#. It might not be sufficient for a real application, but I guess you get the idea:

I am not sure about the UML, but here is a C++ implementation which compiles and runs. This solution uses abstract base classes. So a Branch contains "children" each of which can be either a Leaf or a another Branch.

Here is the output:

Yes it can, a class can contain objects of it's own class;

So what you want to do is create a branch class that contains details of all it's children, the implementation of what you've described could be like this:

So now each branch can contain infinite number of child branches.

Not the answer you're looking for? Browse other questions tagged design-patterns object-oriented-design uml class-design composition or ask your own question.

6
Pattern for group of entities with one required primary member
14
Design: Calling back to the parent class
12
Using visitor pattern with large object hierarchy
1
OOD: All classes at bottom of hierarchy contain the same field
0
Restricting object types that can be added to each other using the Composite Pattern
3
Is my class structure good enough?
0
Where should I put the database access method in a treeview environment
0
How to implement a chain of events on a tree's CRUD operations?
0
Class Model - optional grouping, referencing the parent or the grandparent
1
UML Composition parent multiplicity