I'm trying to calculate a trajectory in the presence of time travel.

In the following picture, there is a character traveling toward the right in a straight line (like a billiard ball). If the character encounters another character, he will always turn right (as a rule). There is also a time portal at the bottom, that will teleport you to the exit portal, 2 steps back in the past.

In this scenario, there are 2 possible trajectories for the character: 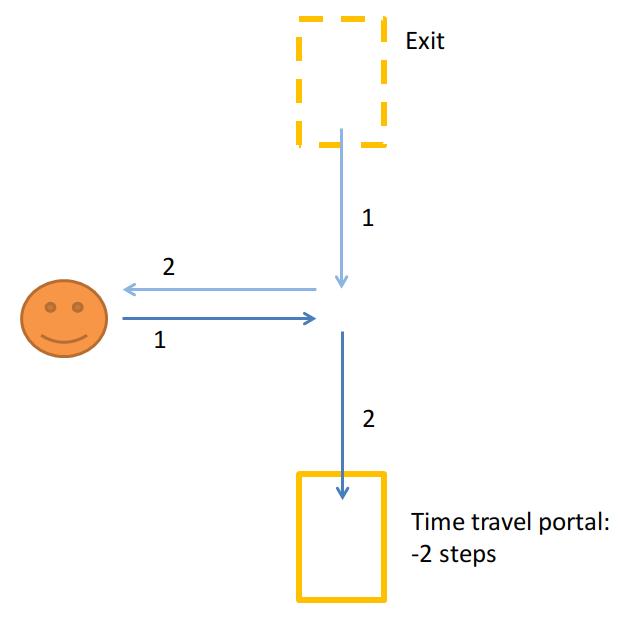 My initial idea was to:

The spacetime block is represented as a 3D lattice graph, with edges labeled as type "X", "Y", and "Z" according to their direction. Time is represented by "Z" edges. Using this representation, time portals are simply additional edges between non-adjacent nodes. The algorithm would produce a list of edges (the order may not matter).

Rules for the algorithm:

Is there a better algorithm to find automatically the second solution? Bonus point if your algorithm does not treat portal "exits" as something special, but just as a normal path through spacetime.

algorithms graph
Share
Improve this question
edited May 17 '21 at 17:48

I'm sticking to the specific example (no user inputs, no collisions other than between characters, fixed direction movement, 1 portal, rewind exactly 2 turns to the past) to make the algorithm a bit more concrete and easier to parse.
To generalize this any further, the idea is the same, but it's just a bit more complex to implement and explain in words.

How long do you need to run this simulation, i.e. what is the max T? That is very subjective. Your example now is very simple and it's easy to see that past a few turns, the game repeats at infinitam. But if you e.g. put the character in a bounded room with the ability to bounce off the walls, that limit possibly ceases to exist.

If you assume an unbounded plane and your "map" fits in a neat rectangle shape, then you can decide to end the simulation once all characters are outside of "the map" into the blank universe, since this means they will forever continue on without interaction with one another.

Other than that, it's a matter of running the simulation for a really long time until you come across a state you have seen before (both position and direction of all characters), at which point you know you've hit a cyclic loop (as the repeating state will generate the same repetition of events.

An algorithm that could work is:

As a character that has traveled through the portal can interact with the other characters on the board, even with all the deleting of branches mentioned above, you will likely end up with multiple plausible game states at any point in time (i.e. a multiverse).