How do I decouple this coupled application?

I currently have this Bot Viewer application 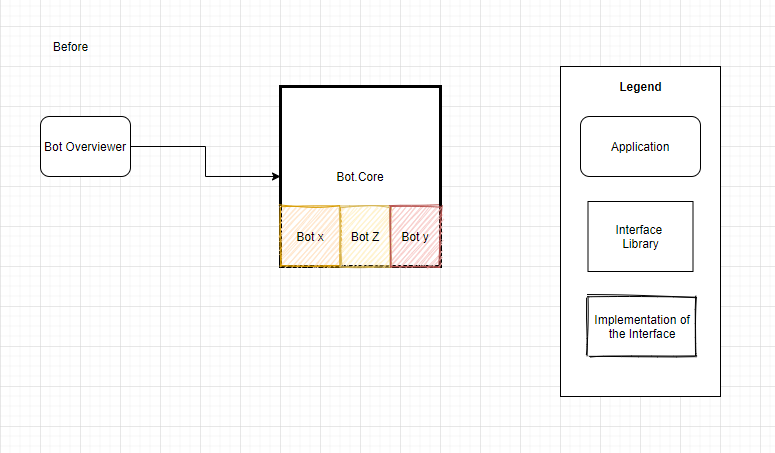 Which consist of the application itself - the Bot overviewer, which depends on a library Bot.Core.

Within Bot.core we have defined the core interface for each bot, and within this libary also implemented them as Bot x, Bot Z, Bot y.

Since Bot.Overviewer depends on the Bot.Core library, it can also see the different implementation, and thereby register them => add it to its scope.

I now want to to separate it to something like this 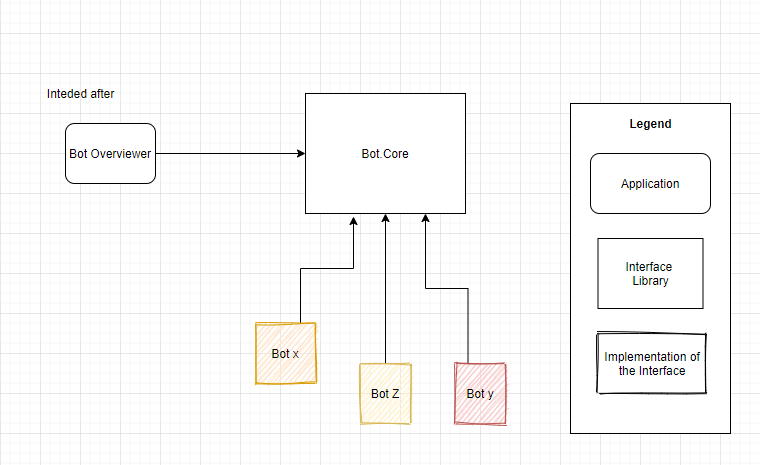 Where each bot implementation is separated into its own application. This causes the issue of how do I then register the different implementations of the bots?

Since Bot.Core - don't know who is implementing its interface, and bot Overviewer cannot not see it either.

How do I make Bot.Overviewer aware of those who has implemented the Bot.core interface?

The challenge in your design, is to have "independent" bots and an "independent" viewer and being able to connect them without coupling them.

First things first: the key constraint is that the Bot.Overviewer interacts with a bot only through the BotCore interface:

Then, how to connect the viewer with the bots. The important thing here is to foresee some kind of registration mechanism that is exposed via an interface. For example:

How such registration is performed is left open. Your diagrams are too ambiguous (maybe a C4 model or even some UML could help to give more precise information of what's behind each shape): It's not clear to me if it is a run time issue with independent bots and viewers working on independent devices or a compile-time configuration within a single software system.

But regardless if you solve it by requiring sole programmatic wiring during the initialization of your system, if it is driven by the user interface, or if it uses a mediator or some kind of more complex discovery services, the some kind of injection or registration mechanism will be needed.

Following the exchange in the comments it appears that bots and viewers are all in the same software solution. The decoupling issue can then be narrowed down to decoupling the library from any concrete bot viewer implementation. A potential approach could be: 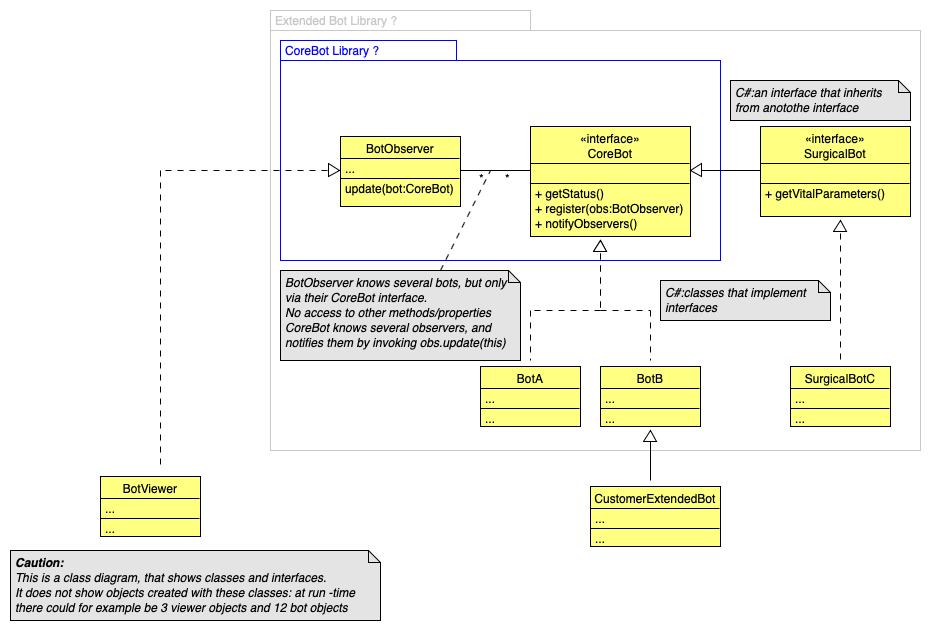 Organizing the viewer registration to the bots when objects are created offers the greatest flexibility: you could well have different viewers for different sets of bots.

I would not recommend it, but if you want to automate the registration at bot instantiation, you could define a kind of static property somewhere, that would keep track of the default observer(s) that has need to be automatically registered at every CoreBot instantiation. It's a variant of a a service locator with all its drawbacks, but it could suit the needs.

There are two common ways to handle this.

The main issue here is that the Overviewer has no access to the Bot X type, so it cannot reference it for config purposes. But Bot.Core can reference it.

If you add a ConfigureBotX() method to your Bot.Core project, that method can do the configuration of the bot, and the Overviewer can just call that method instead of doing the config itself.

B) Let Overviewer directly depend on Bot X/Y/Z/...

This is a very common approach for a library that has multiple compatible provides, such as Entity Framework and its many provider packages.

Where each bot implementation is separated into its own application. This causes the issue of how do I then register the different implementations of the bots?

Use Plugins and do it at runtime.

You could either add it to Bot Overviewer or Bot.Core but that might feel a little bit clunky. Those two modules are very stable modules and might rarely be touched after initial development, whereas bots might change every day. You don't want to rebuild either just to accommodate a new bot. Especially if you are planning to have 100 different bots.

A way to solve it is to bundle each Bot independently together with enough meta information to fully describe it and load them at runtime. In Java for example a Bot might implement a specific interface defined by Bot.core and then be bundled as a jar-file. Bot overviewer can then have different ways to find jar-files containing plugins:

You might want to check out Robocode, a game in which players write a Bots in Java, bundle them as Jar and then let the game load them at runtime and fight each other: https://robowiki.net/wiki/Main_Page

I'd throw a queue or two in there.

Payload contains any required details of the bot's implementation, such as name.

You can do this through either actual queues or structures/classes that implement various interfaces (IBot, IBotCoreStuff etc.)

Not the answer you're looking for? Browse other questions tagged design c# coupling or ask your own question.

53
How do I avoid cascading refactorings?
7
What is the correct approach for creating an application around a library?
5
Should an application configuration interface be broken into multiple interfaces to reduce feature creep?
10
Using Interfaces for Loosely Coupled Code
3
Adding behaviour to a part of a third party class
2
Task Parallel Library Console Application Design - How do I lock a thread to a specific context?
1
How to implement an opaque handle in C#
4
Decoupled design using static interfaces
2
How could I extend these methods that use flexible arguments?