Shouldn't the scope of an injected dependency be dictated by the underlying implementation?

So, I'm binding an InMemoryCachedCarRepositoryDecorator to an ICarRepository, and obviously I should bind it as a singleton, because otherwise it wouldn't work (as intended).

So this got me thinking:

Shouldn't the implementation dictate the scope of the binding?

(It doesn't seem like major DI frameworks support this, and I'm wondering if there's a valid reason for them not to. It should be easy though: enforce any implementation to implement some Scope-like interface, like InMemoryCachedCarRepositoryDecorator : Singleton)

The singleton design pattern limits a class to one and only one instance. The compiler and language constructs like access modifiers enforce this restriction. That shouldn't be confused with a singleton registered in a dependency injection container, which means for a given scope the container should return the same object instance.

To be clear, the interface should not indicate the scope or lifetime of an object. Indeed the scope of the binding in the DI framework should be determined by the implementing class, but not in the way you think. The composition root of your application has the broad knowledge of dependencies and is in the best position to determine scope. The composition root (think main() or Application_Start()) is the point where all these dependencies are wired together. You know concrete implementations and have the bigger idea of how all these objects work together.

So I would expand on your statement a little. The concrete implementation and composition root determine the scope of an object in a DI container.

From one of your comments:

So the implementation and the composition root determine how long a dependency lives, and how many instances of that dependency are allowed.

To dictate the lifetime, the implementation must be able to talk with DI framework(s). This is wrong on many levels.

Considering that DI framework landscape has no limits and only grows over time (new frameworks appear, existing frameworks evolve), you will be putting enormous burden on the implementation author. (Including 3rd party vendors, if that's unclear.) In practice this means that only handful of popular or author's favored DI frameworks will be supported, if any, causing stagnation. Now factor in the sheer amount of components that would have to implement this lifetime reporting feature — the amount of wasted effort is unfathomable.

All this trouble for what, to spare a few minutes of reading documentation?

Alternatively, you'll have to wrap every implementation to add the lifetime property, or annotate with attributes or tag interfaces. Which is same as normal configuration, but all over the place, and no easy way to override for specific context (e.g. testing).

The power of DI comes from decoupling, and the main recipe for decoupling is separation of concerns. Components should not be concerned with managing their lifetime.

In your specific example, the actual cache implementation may be extracted into a singleton, while the decorator could be a proxy that joins the cache and the repository together. 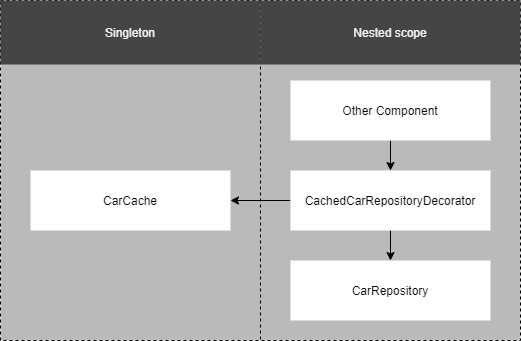 Also to address a misconception from the comments. Component's lifetime is not a component's implementation detail. If a component wants a specific lifetime scope, it should be stated in it's public contract. But most often (I'd say always), component should not care at all, because the composition root has better understanding of a system and therefore should always have higher authority in making that decision.

This is obvious when working with slightly nested IoC scopes. Imagine GUI multi-project application, each project having it's own database. There is one scope for entire application, and one scope per each project. The project-related cache goes into a nested scope, not a singleton.

DI is no worse

In this case, it is the caller that determines the lifespan of the object, not the implementation of the object itself. The caller has to decide whether to store the instance in a local variable, member field, or static field, or in some other holding area like HttpContext.Item.

So the same problem existed before DI.

The caller can then register this factory any way they want and you will still end up with one and only one instance of MyClass.

This way the implementation controls the instantiation rules via the factory, just as before DI. And this fact is made obvious to the caller, and impossible to ignore.

If your implementation won’t work without something that does X, whatever X is, then it has to says so. If the best way you think of to describe X is multiple interfaces or a concrete class, then that’s what your class needs to say it wants. The implementation says what it needs, it is then up to something else to provide it. That is the whole point of DI.

That said, just because you are using a DI and interfaces, that doesn’t mean you’ll necessarily be getting different concrete classes at runtime. Quite often even though it’s an interface, in practice there’s just one class that implements it, except for a fake class created during testing. If you need something, and you know that you are going to get it, don’t stress over the fact that there isn’t really a good way to ask for what you need (happens all the time with non-functional requirements, if you are going to add a million items to an ISortedCollection then it better not use a bubble sort). Make a note of it, and move on.

2
Which of these is the best strategy for dependency injection?
3
Is it a bad design to specify default bindings when using Inversion of Control (IOC) containers and dependency injection (DI)?
15
MVVM and service pattern
2
Dependency injection - how can I design this situation with one composition root?
0
Passing runtime-read configuration when working with an IoC container
0
Externally relying on the method call of the DI class means introducing a dependency on the implementation detail?