Where should email notification logic go? 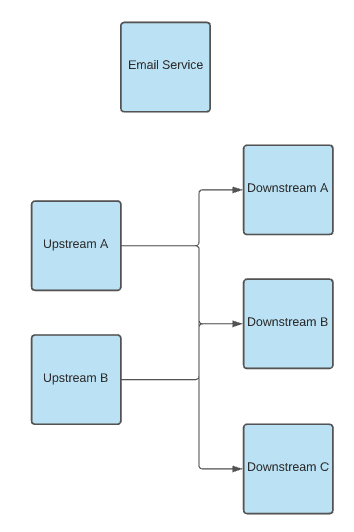 Each block is an individual service. There may be more upstreams and downstreams added in the future. The upstreams need to send email notifications to users. Each email is specific to a single upstream.

The question: Where should I put the code to call Email Service, in upstreams or downstreams?

However, in addition to upstream requests, there are background emails. For example, if something hasn't "happened" (determined by downstream) in 1 hour, then send an email. These are driven by cron jobs and queues. It would be nice to place this background email logic in the upstreams as well, however:

Right now I'm thinking the approach to be:

I feel this is the best tradeoff between design and effort.

First what are you trying to achieve? You are wanting to consume some data X and apply some behaviour (format and send an email). It doesn't matter that you are sending an email, this could just as easily be a report, or any other IO device. So lets zoom out and look at the data flows.

You will find that each behaviour needs different data. Like you've pointed out some need data, but also the knowledge that time has passed. Others need data from several different processes. The point is that each of these output devices are linked into some set of data, delivered through this or that path.

So the answer becomes the behaviour should be where the appropriate Data flows converge. If that is the upstream program, downstream program, or some other place then the most logical place is that place.

That being said, it isn't always the best idea to keep growing a process to have more responsibilities. It tends to lead toward brittle code. It is better to introduce a new data-stream and plugin the new output processors. Those processors could be housed in a dynamically linked library (loaded into the same process), or across a network/IPC boundary (in another program).

Another note is that you can have considerable control over where those data-flows converge, there are downsides to pushing flows around, but they might be offset by other convinences.

Not the answer you're looking for? Browse other questions tagged architecture microservices architectural-patterns email notifications or ask your own question.

2
Should I parse an email template before or after placing it in the queue?
4
Managing non-domain application behaviour in CQRS
5
Design periodic batch notification system
79
Which way are downstream and upstream services?
7
Notifications in a microservice architecture: In Application Logic vs. Database Triggers
2
Aggregated Notification Microservice
2
When to send a push notification to a chat app?
0
Where to store side effect state in an event sourcing system
0
Can a microservice contain multiple applications?
2
Where to place an in-memory cache to handle repetitive bursts of database queries from several downstream sources, all within a few milliseconds span