Is there a difference between these two data models?

Let us say I want to store on a database a userID, their nationality and if they are from the UK their UK passport number. 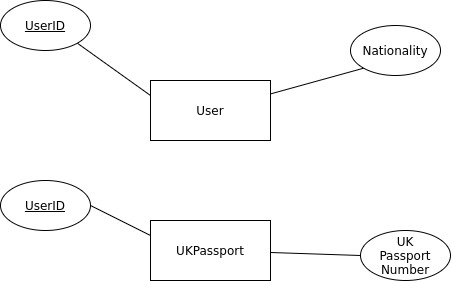 Is there a difference between these two designs given I use a document oriented schema-less database ? Both approaches have a O(1) query complexity and the only difference I can see is that on the first one if you want to retrieve the passport number you have to fetch the whole object. Is there another reason I should prefer the second approach which also seems a bit more complex to develop ?

I am interested in arguments on maintainability and scaling as well .

Semantically, in the current state of the model, there is no real difference. On the non-functional side, one may get the ability of placing individual access rights to the UKPassport table (in an easier way), but one should check if such a requirement really has to be expected.

Something which may make a difference is potential evolvement: as soon as you want to add further passport related attributes, which are not attributes of a user (like expiration date, color, size etc), it makes sense to model the passport as an entity of its own. However, it may be early enough to refactor the model at the time when these requirements "arrive", depending on how easy it is in your development process to change a data model at a later point in time.

Not the answer you're looking for? Browse other questions tagged database-design data-modeling or ask your own question.

1
DB Schema for ACL involving 3 subdomains
3
Which database schema should I pick?
2
Effect of denormalizing
2
DB Schema design : single table with more columns vs multiple tables with fewer colomns
0
Regarding data modeling in a NoSQL use case
3
How to design a multi-year statistics database?