How to represent association classes in a UML component diagram?

Please consider a class diagram and a component diagram as shown below. In the class diagram I use association classes to represent the relationship between two classes (BaseLink and ShoulderLink) as well as between a class and an association class (Motor and J1). In the component diagram, I can represent properties holding instances of the classes BaseLink, ShoulderLink and Motor but not J1 and T1. Whereas J1 can still be expressed as the type of a connector between the properties base and shoulder, I see no way to express the connection between this typed connector and motor1:

For clarification: The component diagram is missing the bounding box of the surrounding component and can thus be mistaken for an object diagram. 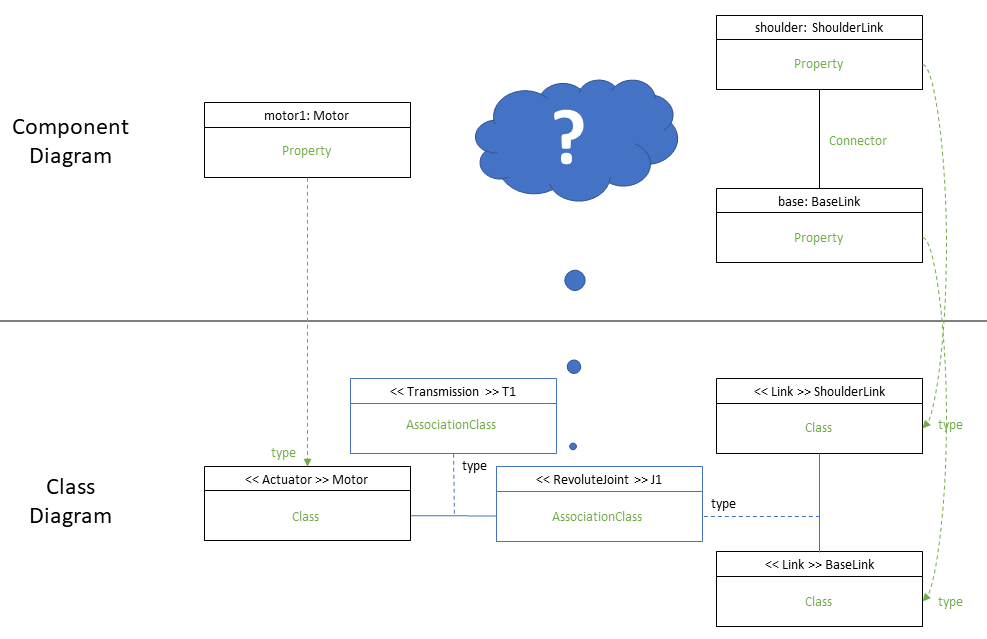 I am searching for a way to represent this association class in the component diagram as well and I am looking forward to your suggestions.

Indeed, as Filip rightly spotted in the comments, the upper part does not seem to show components (which are related to other components via interfaces, an do not use the : syntax for their identification), but either:

But in both case the notation and mapping are the same:

There are two possibilities for an association-class A between X and Y:

The first one seems closer to the design semantics whereas the second is more explicit on the meant implementation.

1
How show Attributes which appear In Many To Many association
3
UML class diagram: how to annotate observer-subject relationship?
1
UML Class Diagram: How can I represent "orthogonal" generalizations (or multi-inheritence)?
5
How to correctly draw a UML class diagram with fully qualified association?
0
UML- Aggregation or Association
6
How to model user management using UML class diagram?
1
How to show UML component load/discovery and realization relationships
1
Depicting association between list and a class inside this list in UML