How can I manage dependency injection in test code?

This question is a follow-up question to Clean Architecture use case testing. 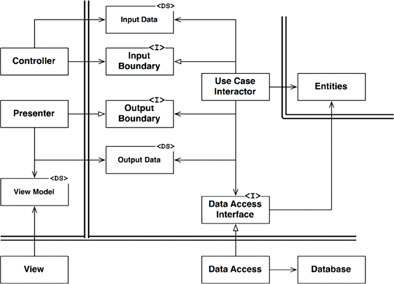 Is there a clean way to handle this situation?

How can I manage dependency injection in test code?

The same way you manage it in production code.

Then production code is confused because you don't inject classes into interfaces.

I think it would be best to test UseCaseInteractor directly, rather than throught the boundaries. @Brady Dean

Using UseCaseInteractor through the boundary is the direct way. Anything else is sneaking past the abstraction you're meant to use. Tests that sneak in the back door only prove that the back door works.

Is there a clean way to handle this situation?

Focus on the behavior you expect when you use the unit under test in the way it's meant to be used. Don't worry about isolation unless that's needed to make the unit's behavior deterministic and fast. Don't go sneaking around abstractions. And stop treating behaviorless structure code as something that needs to be tested.

The input boundary is a simple abstraction to prevent the controller from knowing about the specific use case interactor. It doesn’t do anything, it simply invokes the interactor.

If your language supports generics, you can makes this a generic class. In your test, create a fake interactor and use that to test the generics.

Personally I use the Mediatr library (C#). All interactors implement an IRequestHandler interface and input data implements IRequest. Inject Mediatr into the controller, create a new request and call mediator.Send(request);. It doesn’t get much cleaner than that and because you can rely on a library you don’t even have to write and test the glue code yourself!