I have to create a reporting system based on hundreds of different tables in a database (which means a huge volume) and I'd like to know the best practices and/or your wild ideas about it.

Here are the details:

The easiest solution would be to implement each report individually for each brand, but this would be time-consuming and pretty much a repetitive job, so I'd like to avoid this approach.

I am thinking on a 'pipeline' style architecture (see attached image), where I just define some rules for each segment and the same algorithm can calculate the result no matter of input parameters. This way if I have to display a new report for Rolls Royce I just define some rules and I get the results. About the rules, I was thinking about table definitions per brands, field mappings, etc. 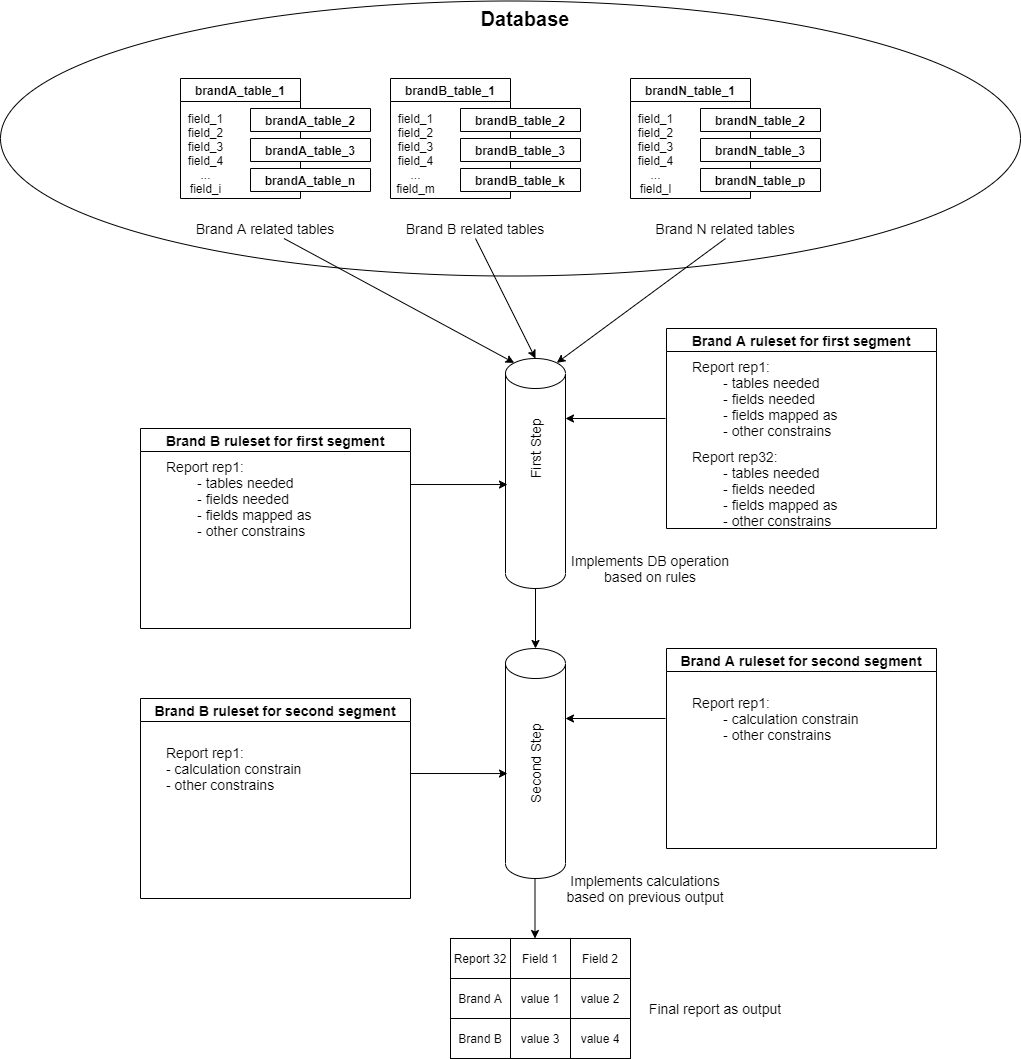 My problems with this solution is that I have to implement some kind of an interpreter for each step, to analyse and execute the rule sets which is risky, not maintainable, and I'm not sure if it is scalable at all. Are there any other approaches or best practices to avoid repetitive work?

Based on the presented information, a simple interface will cover your reusability needs.

Note: One could argue about using a base class (abstract or not) instead of an interface. I suggest erring on the side of interfaces in languages which don't support multiple inheritance or when the needed contract does not require a base implementation.

You've established here that while the data is stored differently, you expect to handle the same data (once retrieved). The retrieved data is not specific to a given manufacturer and you can therefore create a single data entity to represent it:

This is just a basic example.

However, the fetching of the data is different per manufacturer, so your repositories will be distinctly different. Nonetheless, they share the same reusable expectation: retrieving cars. This is why we define the interface:

You can of course expand this interface, e.g. GetByEngineCC(int minCC). This depends on what you need.

This can then be implemented by your manufacturer-specific repositories, which individually have different private logic to fetch the needed data.

This ensures that you can write report generator logic that works for all possible manufacturers. For example:

Notice how this reporting logic works for all manufacturers, provided that these manufacturers' repositories implement the needed interface.

This is the core principle how to handle internally different implementations (i.e. unique data fetching) but with externally common handling (i.e. generalized reports). You can now add new manufacturers into the mix by creating additional concrete repositories but no other code needs to be changed, which is the desirable goal.

On the other hand the prices and sales are stored in one table in case of Toyota but in five (foreign key linked) tables in case of Mazda.

This way if I have to display a new report for Rolls Royce I just define some rules and I get the results.

This is not a "rule". This is a different implementation. Your underlying idea is correct but I suggest refraining from calling it a rule, because people will misunderstand your intention.

Essentially, all you have to do is add a Rolls-Royce-specific repository which implements the same interface (cfr step 3 mentioned above).

Note: Because you talked about database tables, this example used different concrete repositories using the same interface. In other cases, it might make more sense to implement this interface on the BLL rather than the DAL. But it's the same principle at play regardless of what layer you implement it on.

1
DB Schema for ACL involving 3 subdomains
50
Best practice or design patterns for retrieval of data for reporting and dashboards in a domain-rich application
5
Database design for polymorphic data
3
An approach to multilingual db design
2
Best approach to store huge amount of denormalized/dynamic data with relational database
2
How to design ER diagram to allow for retrieving of product option pricing data?
3
How to Handle Item Prices Change for Reporting