I have the following requirement to design behavior of a software component for logging sensor, which writes data to SD card a:

Datalogging sensor can write data to a FAT16-formatted SD card that is inserted into the card reader slot. When the board is booted and a valid card is detected, a new file is created and data from all messages on the can bus is written into this file. As long as the card is valid and there is error message present in can bus, this sensor will log the error to sd car. There is no mechanism to specifically close the log file. Just remove the card or power down the board. There is a bootloader in the board which checks whether the SD card is valid or invalid and sends signal (ValidSDCard and InvalidSDCard) to datalogging sensor accordingly.

I have come up with the following state chart: 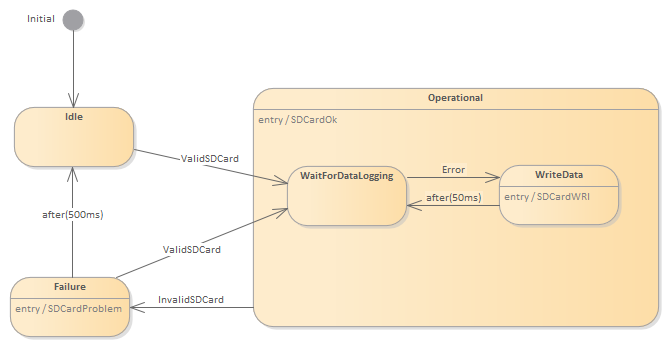 What I am not sure is whether the new file creation command is being sent by the bootloader or the logging sensor itself invokes the new file creation command when it finds the valid sd card signal from bootloader. If later is the case, what is the way to model it in this state machine? Also, I am not sure how to go to idle state when power down the board. I am also not sure whether my current model is correct or not.

I am also not sure whether my current model is correct or not.

In the basis, your model looks fine. The only transitions I have my doubts about are the timeouts (after(...)).

I would expect that the WriteData state transitions to WaitForDataLogging after the writing has finished, regardless of how long that takes. In a state diagram, that would be shown as a transition without a trigger.

Also, the transition from Failure to Idle puzzles me a bit, but you might have a good reason for having that transition in.

One way to model that the file gets created when the logging sensor detects a valid SD card to to have it as an additional entry action of the state Operational.

Also, I am not sure how to go to idle state when power down the board.

If you are modelling the entire system, you could put your current state machine in a super state "PoweredOn" and create a new state "PoweredOff" with power-down and power-up transitions between them.

5
Event Sourcing , sagas, bus and eventual consistency
3
Logging an audit trail (Java application)
0
UML state diagram for N number of approvals
0
Using UML State Machine for blockchain smart contract implementation
5
In an UML 2.5 State Machine, how can I model sending a Signal as an effect on a transition in a convenient way?
0
UML - State Machine Diagrams: Mapping States which can be transitioned to from anywhere
1
UML design for data analytics of aggregated Survey Data