As per Robert C. Martin in Clean Architecture, he gives a simple UML diagram to illustrate Dependency Inversion. 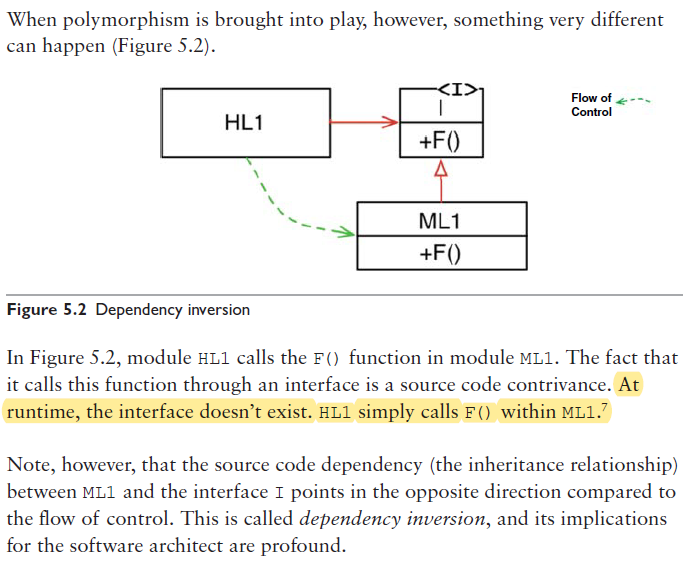 Here, I tried to embody this concept in C code, but ran into some difficulties.

The result of this program ends up with segmentation fault, which is not surprise at all, because none of code invoke ML1_init(). What really confused me is

Q1: Can interface module (interface.h and interface.c) represent interface <I> in UML?

Q2: Who is responsible for invoking ML1_init()? When to?

Q3: What is missing piece if above C code is not equivalent of UML?

As you already understood, your program requires an initialization to set up the inversed dependencies. This is often called dependency injection. For small to medium sized programs, the main function can take this responsibility (larger OO programs sometimes use specific components for the initialization, so-called DI containers, or IoC containers). This leads to two phases, the initialization phase and the execution phase. The latter should start at some entry point called from main, after initialization was completed.

So to answer your questions:

Q1: Using UML to describe an interface in C is resonable. Though UML notation was more intended for classes and OOP, there is no "law" which forbids it to use it for modules, and you are not the first person to use it that way. Just think of a modules as a "singleton object".

Q2: main will be responsible to call ML1_init() before the execution phase, or an initialization function which then calls ML1_init. In a more complex scenario, the initialization phase might include a step where it makes a decision between modules ML1, ML2 or ML3, based on some condition, and registers just one of them for fptr.