Is it a mistake to distribute shopper data across microservices rather than have its own microservice?

I'm studying DDD and trying to plan how we'll migrate from our monolith to a microservice architecture. At the moment I'm trying to work through two possibilities

The first is where the shopper is an aggregate with its own microservice. There's CRUD operations against these users and their data is replicated to other microservices where needed (i.e. Billing Address replicates to the Billing microservice) 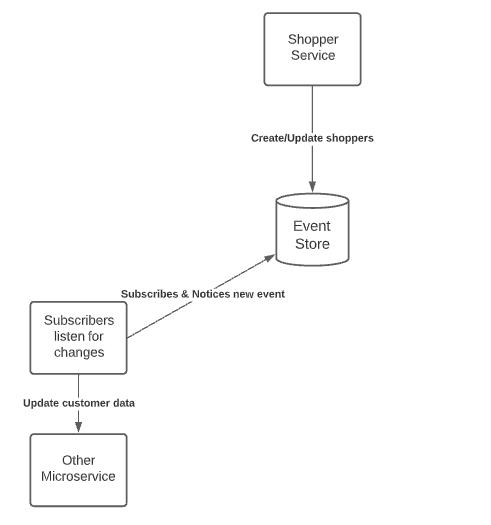 The alternative is to avoid storing data in the Shopper service at all, and only storing it in its final destination. The shopper service would act more as a gateway to call APIs to modify the shopper data in its final location (so the billing microservice is the source of truth for the shoppers billing address, and can modify that data at will) 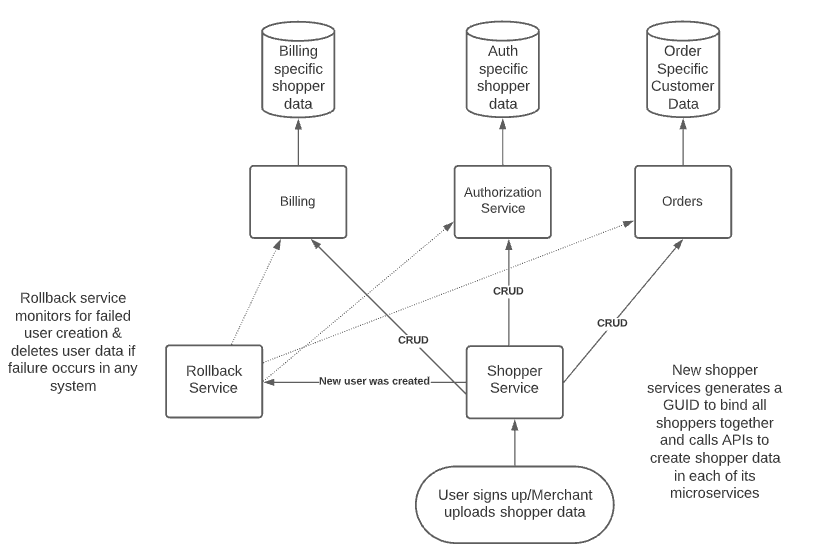 This seems messier to maintain the APIs and keep track of where all the shopper data is but seems way more efficient in terms of read/write and keeps shoppers isolated to where they make sense within their bounded contexts.

Does this second approach make sense or is it flawed in some way?

There's CRUD operations against these users and their data is replicated to other microservices where needed (i.e. Billing Address replicates to the Billing microservice)

The main argument for data replication is that you intentionally wish to disconnect one source from another.

For example, if the customer changes their address today, you wouldn't want their orders from 2020 to suddenly show the new address. Therefore it makes sense to make a copy of the "current" address at the time of billing, and store that snapshot without it being affected by future changes made to the customer.

You're misusing "source of truth" here. By disconnecting the address stored with your customer and in your billing, they have become independent sources of truth, which inherently means that a change to one does not reflect on the other.

The above example of a customer moving but not wanting to update their old billings is an example of how a change in one does not get reflected in the other.

If you want a single source of truth for these addresses, then you need a single copy of that information. This could be in your Shopper microservice if the address is scoped to the customer; or it could be in your Billing microservice if the address is scoped to a single billing and therefore individually decided per billing, even if they are for the same Shopper.

If you store the data in two sources, then you by definition don't have a single source of truth. (Edit: More precisely, the concepts of a shopper's address and a billing's address are separate, with each being its own source of truth.)

Note: Supposing your Shopper becomes the single source of truth, it can still be made possible for someone to adjust the address when looking at a billing entry; but when doing so the Billing microservice should push that update to the Shopper API and not actually try to store any of that information in the Billing database itself, thus retaining the Shopper API as the single source of truth.

and wait for their cache to refresh.

Caches are a bit of an exception to the "single source of truth" design. They are not implemented for a design reason, but for a performance reason. A cache is inherently considered to be an inferior (but more often consulted) source of truth.

As the saying goes, there are only two hard things in Computer Science: cache invalidation and naming things. How you update/invalidate your cache is an entirely different topic of conversation from how to structure and design your microservices.

The alternative is to avoid storing data in the Shopper service at all, and only storing it in its final destination. The shopper service would act more as a gateway to call APIs to modify the shopper data in its final location (so the billing microservice is the source of truth for the shoppers billing address, and can modify that data at will)

Calling it "the" alternative implies that it is the only other option. It isn't.

But more than that, this approach has significant flaws. For example, let's say you update a shopper's address via the Shopper microservice, but only the Billing microservice actually stores addresses. If the shopper has multiple billings, how are you going to handle this?

The way you're suggesting going about it either proves that the address is being stored in the wrong place, or that you're going to introduce unnecessarily tight coupling between two microservices. Neither are a great idea.

It's unclear to me why you've only considered storing the address in both locations or only in the Billing database; but seemingly did not consider only storing it in the Shopper database.

I don't know the full picture of your application of course, but I see two likely courses of action here:

How you implement caching is a different concern, and one you should only address once you've actually settled on a design for your architecture.

Why do you want to migrate to microservices?

There is no "generic" way to do architectures, at least not good ones. You have to first define goals and then decide things based on those goals.

Now, in general, you want microservices because you want to scale either organizationally (different teams, iteration speed) or operationally (requests/sec), or both. Again, in general, introducing "CRUD" based microservices is a bad idea. It is easy to see why. Any "data" based interface will create dependencies between the two or even more services.

This will work if you keep it limited to a small number of services that you're only interested to scale differently runtime. For example create update and read services to the same data because they scale completely differently.

Barring any such use-cases, in general, you should strive to make microservices independent. That is, implement a complete use-case on its own, without needing to communicate with another service. This is the only way you will achieve independent release cycles or easy runtime scaling.

Not the answer you're looking for? Browse other questions tagged domain-driven-design microservices domain-model or ask your own question.