I have a web applications (angular) which is connected to backend using websockets. The role of web app is to display data from multiple sources (which are updated constantly by some Scala Spark apps) in dashboards;

because the backend is deployed on multiple instances (3x centOs), the frontend will send the request to a proxy, which will redirect on one of the backend instances.

On the backend side, the connection with frontend is made using Akka Actors. Each client actor (which is equivalent as each browser client) have a request body which must be saved in memory (dashboardId which is displayed on page, a list of widgets and some data). So, for each new connection, I save in a list: actorName + this request body. To centralize the data from all backend instances, I save this list on a Redis instance.

The problem: If a 3rd party app will push a request to my backend through the proxy (no matter which instance), it will trigger an event inside the backend: the own backend will create an client and will go on a case which will push fresh data for all listeners (client actors). Because this event is isolated (and physical the actors on same instance) on a backend instance (let's say first: backend1), the rest of clients will remain out of date, even if from Redis I take all actorNames which must be updated (but ~ 66% of them are created on another servers);

I heard about Cluster sharding, read some articles because had a similar problem in past, but can't understand how can be this solved. In my mind, I understand that I need put the client actors in another level than backend instances, somewhere centralized, behind the backend to be possible that each of it to access entire list of actors. 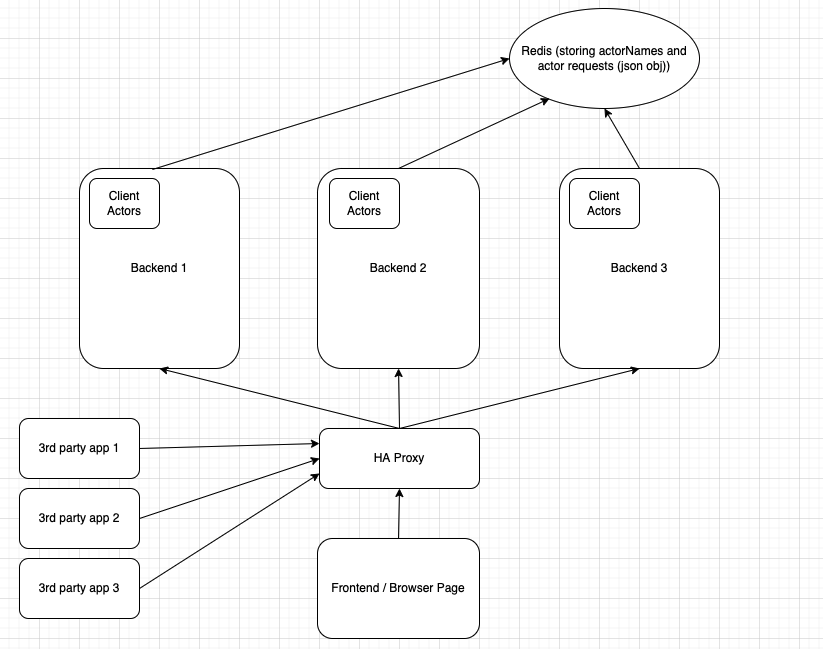 I would take a little different approach. Instead of saving the data in Redis I would use Redis Pub/Sub to share the data incoming request between the different backendes.

So each backend has a actor for the respective client.

All three backendes subscribe to a Redis queue "app1".

So all three backendes become the event that new information for client 1,2 and 6 are available.

So client 1,2 and 6 get the information to update the dashboard. And each backend has only a list of the actors and the corresponding clients which are connected to this backend and don´t even know how many other backendes exist.

I hope this is helpful?

Not the answer you're looking for? Browse other questions tagged scala akka or ask your own question.

4
Using akka actors with service spring beans
67
When is it NOT good to use actors in akka/erlang?
0
Actors in a sequential protocol handshake
4
How do I design concurrent scalable system with guaranteed ordering? How about Akka?
4
Is the actor model suited for an application dealing with elapsed time?
2
Processing messages in parallel with Kafka & Akka
1
Shared immutable state between actors