I have been looking at different solutions for large scale chatting solutions. I feel as if I understand 90 % of it but am turning to this forum to tie the knot.

I imagine running a bunch of message servers behind a load balancer, keeping long lived connections to the client (wss or xmpp). The amount of servers can scale horizontally based on incoming requests. Then on the backend the messages are distributed using a pub-sub pattern. Meaning if two clients are trying to communicate but are connected to different servers, then the pub-sub messaging distribution will take care of it.

So far, it all make sense. The image below clarifies it perfectly. 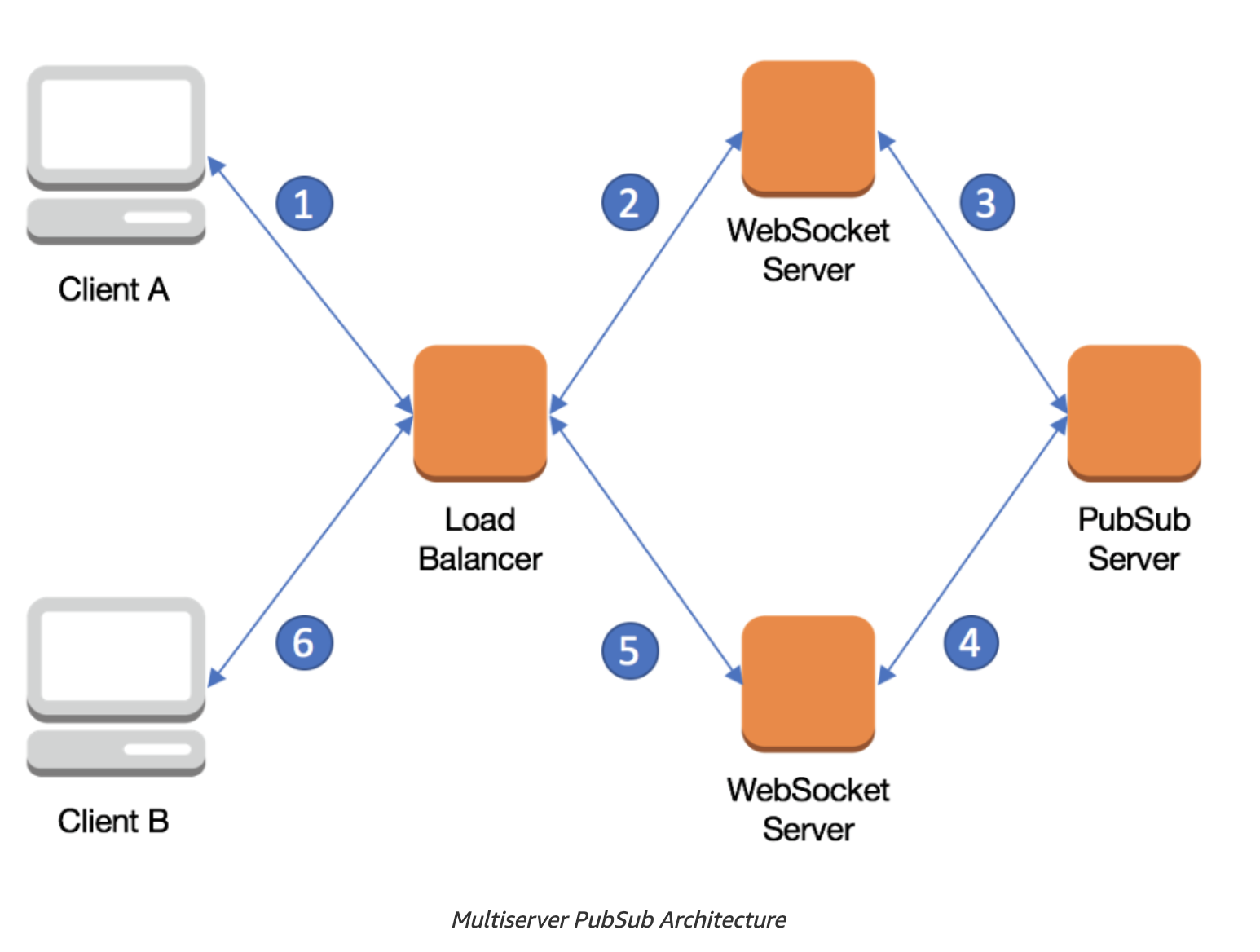 But I can't imagine how each WebSocket Server is managing to subscribe to all of the topics the PubSub server (redis) will handle.

I imagine the PubSub server managing 100,000 requests per second through sharding. But I can't understand how every WebSocket Server then handles the subscriptions. Because being subscribed to all topics on all shards will that not flood each WebSocket Server?

So once we go down that path of sharding, how do we distribute messages properly? Because then we need some intelligence in order for each WebSocket Server to be subscribed to the exact right topics where client A and client B is sending its messages. Somehow each WebSocket Server needs to be continuously subscribing/de-subscribing based on which topic is being used for client A and client B.

Or is actually the WebSocket servers capable of being subscribed to EVERY topic? Am I wrong in seeing this as a problem? If so, then why use load balancing at all?

I think the biggest bits you need to solve for are understanding the individual nodes in your graph more deeply.

Load-balancers tend to regularly poll the related nodes to determine their load state.

Typically a load-balancer is a configurable piece of software. The configuration you provide it will determine when to start targeting other nodes in your configured resource stack. Whether they be containers, virtual machines, physical machines, or some other esoteric variant.

Those rules tie into the horizontal scaling. Typically the scaling rules of the system tend to go hand-in-hand with the load-balancer. After all, you'd need them to be similar, or once the load-balancer says 'oh, this node is too busy', it won't have another node to forward the request to. Should that configuration occur, the existing nodes would be loaded until they flat-line.

From a logical standpoint, having every WebSocket server (WSS for short) queued up into every possible topic is impossible as it is constrained by the limits of the hardware.

The connection, or socket, received for a given WSS identifies the client as part of the original transaction. Traits from that client's identity indicate the specific client's interests, such as what topics to subscribe to.

As a client makes a request, they are registered with a given WSS for that connection.

Most likely what you'd have is some form of broad-based push notification from the PubSub to the WSS layer to say 'Something event has occurred.' Only when the event is received from the PubSub, would the WSS look deeper. Then a targeted query to the PubSub could be crafted from there. You'd use the 'long lived' connections to comprehend what kind of query to write. Each long-lived connection represents a specific client. That client ties to the topics that are of interest.

If PubSub 3-4 says no, you'd immediately end inquiry there.

The PubSub would send a response targeted to the relevant clients. Most likely to reduce the chattiness of the response, it would wrap multiple event notifications up into one. Why? If say 50 of the clients subscribed to the same topic, why would you repeat the same data 49 additional times?

After this, the relevant WSS sends the notifications to the appropriate clients.

As a client makes a request, they are registered with a given WSS for that connection.

This puts a heavier impact on PubSub 3-4, and may even require you to have vertical scaling implemented for it.

Client A sends a message. WSS 2-3 sends the event to PubSub. PubSub interprets the message and additionally pulls in context related to what clients are subscribed. Then parses the list of WSS targets to receive the push notification and sends the notification to WSS 4-5

WSS 4-5 receives a push notification for the common topic, and forwards that to Client B.

Taking a step back, WSS 2-3 and 4-5 each support 500 clients. Client 1 from 2-3 sends a message. 50 clients subscribe to the same topic. PubSub 3-4 parses the interests and sends the relevant push notifications.

After this, the relevant WSS sends the notifications to the appropriate clients.

Both implementation scenarios have their benefits and drawbacks.

Now a question for you. When the load drops, and a horizontal contraction occurs, how does the load-balancer reallocate the open sockets from the dropped WSS? How is that change propagated down the line?

One of options is to use one queue/topic per client. This means if there is a message to be delivered to a particular client, the message has to be routed to their dedicated stream. And, the client, is subscribed to that stream.

For example, if a client A talks to two other clients B and C, then every message from B and C will eventually end up into stream for A. A will read messages and show them in a UI appropriately.

The above approach will work fine for smaller chats - either one2one or small rooms. What if you have huge rooms with many more users? This is very typical system design interview question - design twitter. For these larger rooms, you would have a different architecture. Instead of taking every message and putting it into every client stream, you would use one stream and have a watermark for each client - that will allow clients to pull messages as needed.

The main reason for handling large rooms differently is the fact that many users won't be online at any given time, hence pushing messages to their streams is a bit too much work.

To address this question "I imagine the PubSub server managing 100,000 requests per second through sharding. But I can't understand how every WebSocket Server then handles the subscriptions. Because being subscribed to all topics on all shards will that not flood each WebSocket Server?"

Most clients usually process nothing, so handling their connections is just a matter of memory (websocket+pub/sub client). If pubsub is the issue, you can always decouple websockets from pub sub.

At any given time, your system will know which client is connected to which websocket server. When your backend has a message to deliver for a specific client, the backend will lookup the address of the websocket server and call an api like Deliver(To, Message) and that will funnel the message to a particular client.

Overall, there are many ways to get this done. Please, ask questions for clarification.

Not the answer you're looking for? Browse other questions tagged design architecture scalability websockets chat or ask your own question.

0
How can an update message from a rabbitmq broker reach all relevant clients via multiple websocket servers?
6
System Design: Scalable Chat Server
1
Architecture for communication between multiple backend systems and IoT devices via WebSockets
1
.NET Core Microservice messaging with Amazon SNS and SQS
1
Advantages of using a message broker for scaling websocket client-to-client communications
7
Do I actually need a message broker or are websockets enough?
0
Go (Golang) efficient logic processing in a chat system