Is it considered as bad practice to have code on the __init__.py? [closed]

Questions asking for assistance in explaining, writing or debugging code, or using coding tools, are off-topic here. These can be asked on Stack Overflow if they include the desired behavior, a specific problem or error, and a Minimal, Reproducible Example of the problem.

I am a bit confused about best practices when it comes to where and how to initiate the Flask() or FastAPI() for a data-intensive web API. The vast majority of the code available online is using this structure:

But based on hackersandslackers.com article, this does not seems a good practice:

Notice there's no app.py, main.py, or anything of the sort in our base directory. Instead, the entirety of our app lives in the /application folder, with the creation of our app happening in __init__.py. The init file is where we actually create what's called the Application Factory. If you're wondering how we deploy an app where the main entry point isn't in the root directory, I'm very proud of you. Yes, our app is being created in application/__init__.py, so a file called wsgi.py simply imports this file to serve as our app gateway. More on that another time. 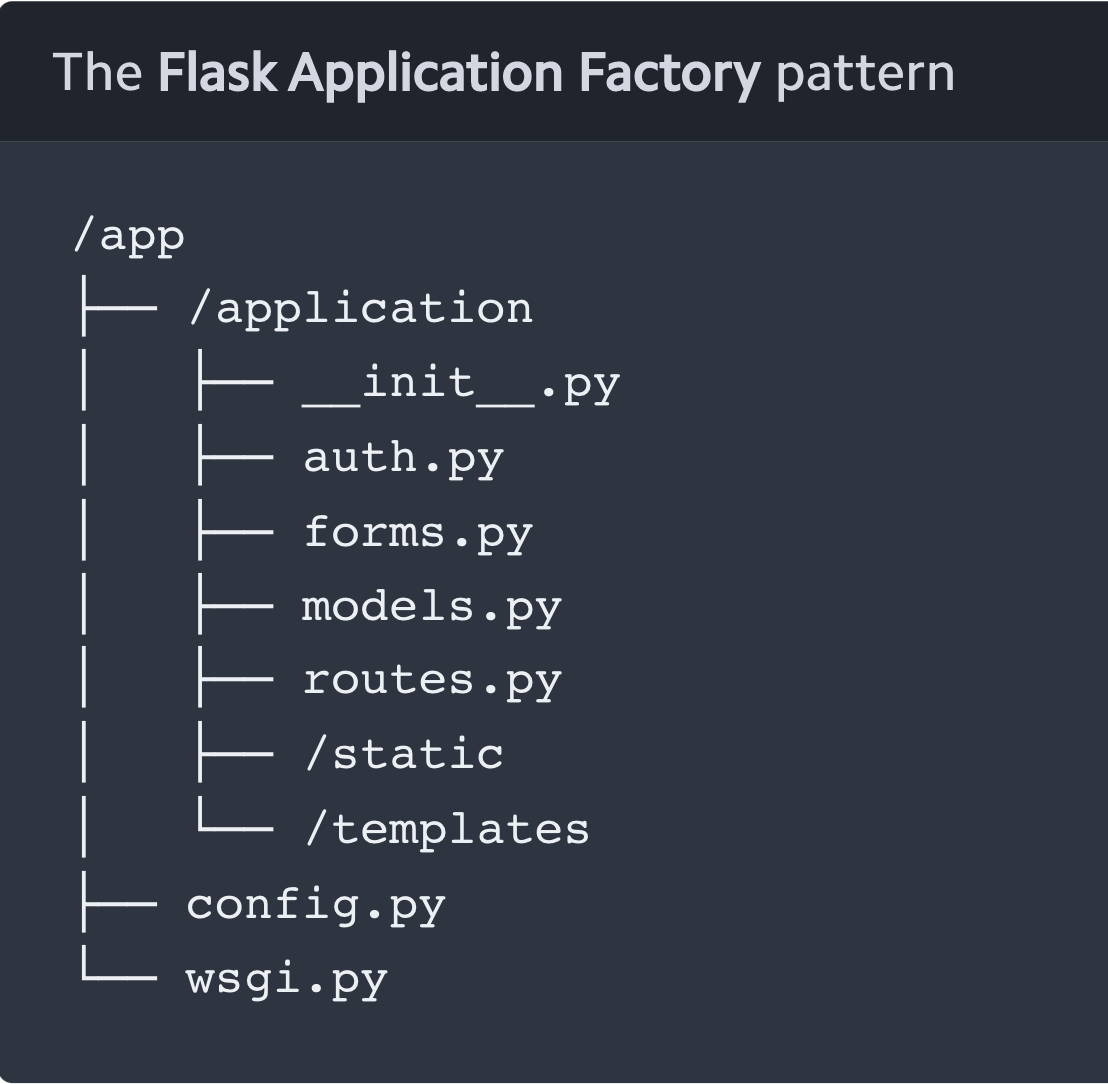 So I did follow hackersandslackers suggestions but I also did a couple of modifications to implement the Factory Pattern on their design. This is my app structure:

And to run my app I have to type uvicorn asgi:app.

I think you are missing an important piece here that I personally found a little confusing when I first encountered it: packages in Python. You can write a lot useful and sophisticated code in Python and never need to use packages. They can be really useful, however, especially if you need to distribute your code to others.

When you create an __init__.py in a directory, you are declaring a package. In your code above, you are creating a package named 'src'. I don't think this is a great name for a package and if you are using packages, I would give it a meaningful name instead. Another thing that you can do in a package is create a __main__.py file. Then you can run your package like python -m mypkg and whatever is in __main__.py will run after the __init__.py completes. If you use pip, for example, it's basically the same as running python -m pip. I actually prefer this way of running pip.

I've used Flask but I'm more familiar with FastAPI so I will focus on the latter. In general, FastAPI doesn't really care whether you structure your code as a package or not. You just need to inform the ASGI application where the FastAPI object is located. If seems to me, however, that the creator of FastAPI prefers using a module named main.py and putting the application object in the main module and name it app. I assert this because if you want to use the container images provided by the author, it will assume main:app is where the application object is located. I wouldn't get too hung up on that, though, because the author also says you probably don't want to use the provided images and recommends you craft your own image instead.

The upshot here is that for FastAPI, I wouldn't bother with packages unless they provide some sort of benefit for your application. Otherwise, I would stick with the main:app because that's the typical convention. But, in general, there's nothing incorrect about putting code in __init__.py. It's a perfect place for initializing the package regardless of how the code is being run. For example, if you want to have modules within your app that can be executed as standalone scripts, using the __init__.py is a good place for common initialization routines and declarations.

0
Setting up folders and importing modules in Python
6
Is it consider bad practice to formally document implementation code?
0
Referencing custom Python modules and data files
3
Logging an application in Python
28
Why is unit testing private methods considered as bad practice?
6
Design pattern for similar classes that require different implementations
1
Improvement of the config file management
0
Clean Architecture: How to decouple the Repository from a CommandHandler?