I often come across this dilemma in my own code and wondered if there is a term for this and if there is a single solution to it. Let me illustrate it with a pseudocode example of making a table from some book info:

advantage: great separation of i/o code and pure [p] functions
disadvantage: no modules -- if you want to e.g. delete the publisher stuff, you have to do it in two places.

I like having these blocks in my code (pure option), block 1 input and block 2 transformations (and block 3 output). I can cache state after block 1 while developing, but maybe that advantage goes when away when I put in my unit tests earlier. And maybe having a pure make_table (pure option) to unit test is not such a big plus since there are all these extra parts that may or may not be in the table.

Looking forward to your thoughts

This is what I call a “matrix problem”: we can structure our system along two or more axes. Here, we have one axis relating to features (book info, author details, publisher info), and an axis relating to different steps or layers (I/O to load info, assembling the table). Our actual code will fill the full matrix of features × steps combinations.

But textual programming languages are linear, so we have to somehow sort this 2D-matrix of code elements. On a fundamental level, both axes are equivalent and we can freely choose what to do. Both of your solutions are perfectly valid. 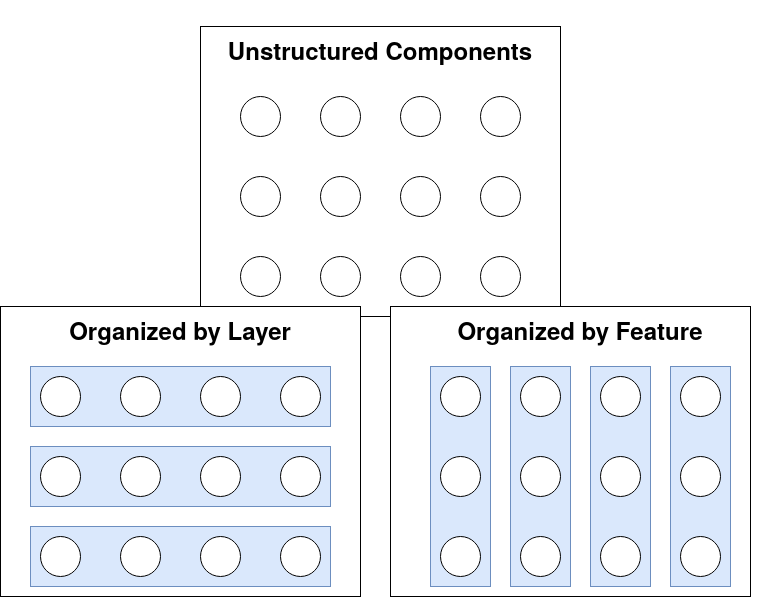 But there are trade-offs for organizing the code one way or another.

First, let's consider organizing by feature, which you call the “modular option”.

This strategy is somewhat common across the software stack, for example with microservices architectures, micro-frontends, or components in React/Vue. Compare also the concept of “bounded contexts” in domain-driven design.

Alternatively, let's consider organizing by layer, which you call the “pure option”. We group code one the same level together, even if it relates to different features. This completely flips the pros and cons.

This strategy is extremely common. We see this separation in the original MVC architecture, in many design patterns, in the classic layered architecture (presentation – business – persistence – database), in the Clean/Hexagonal/Onion architecture, and in concepts like “functional core, imperative shell”.

In general, you can choose by considering which changes are likely. Are you likely to change the UI without changing the business logic, or vice versa? Consider organizing by layer. Or are you more likely to keep the code in each layer stable, but you want to add more features easily? Then organizing by feature makes more sense.

But these approaches are not complete opposites – you should draw module boundaries wherever they are appropriate. For example, a large web application might separate the frontend/UI from the backend (organized by layer), but divide the backend into separate microservices (organized by feature).

In general: things that change together should be close to each other. The fancy word for this is “cohesion”, compare also some interpretations of the “single responsibility principle”.

Ultimately, the important point is not to follow some architecture for the sake of the architecture, but to look for seams in your codebase where it is appropriate to decouple modules.

The importance of these architectural principles also varies with the scale of the system.

This is about finding the appropriate separation of concerns:

Whatever your choice, you will facilitate some changes and make others more difficult with more impacts on other components.

Ideally you would separate the concerns further: separate the io from the rest, and separate the different data and corresponding internal logic/behavior. Something you could do with an obtect oriented polymorphic design or a generic design, combined with dependency injection. But the more granular separation of concerns would imply a higher complexity. So in the end, it’ll be up to you to find the best balance for your project.

11
Architecting a modular service application
3
How do I avoid duplicating utility functions across modules?
8
Alternative to language purity
8
Can higher order functions ever be pure?
4
How to move from OOP object composition to FP function composition in C#
4
Naming conventions for pure functions
2
Swappable state object or decoupling data and functions
0
How to test a function with several conditional nested side effects