Ask Question
Asked 11 years, 3 months ago
Modified 7 years ago
Viewed 49k times
27
As it currently stands, this question is not a good fit for our Q&A format. We expect answers to be supported by facts, references, or expertise, but this question will likely solicit debate, arguments, polling, or extended discussion. If you feel that this question can be improved and possibly reopened, visit the help center for guidance.
Closed 9 years ago.

Code implementations are useful (generalized pseudo-code), but it's also very useful to gather the various uses of FSM's.

Vending Machine (event triggered, a variation of the safe)

BGP is a protocol which backs the the core routing decisions on the internet. It maintains a table to determine the reachability of hosts from a given node, and made the internet truly decentralized.

In the network, each BGP node is a peer, and uses a finite state machine, with one of six states Idle, Connect, Active, OpenSent, OpenConfirm, and Established. Each peer connection in the network maintains one of these states.

The BGP protocol determines the messages that are sent to peers in order to change their state. 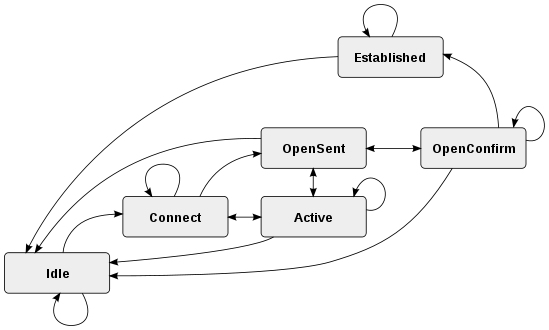 The first state Idle. In this state, BGP initializes resources, and refuses inbound connection attempts, and initiates a connection to the peer.

In the Active state, the router resets the ConnectRetry timer to zero and returns to the Connect state.

In the OpenSent state, the router sends an Open message and waits for one in return. Keepalive messages are exchanged and, upon successful receipt, the router is placed into the Established state.

In the Established state, the router can send/receive: Keepalive; Update; and Notification messages to/from its peer.

More info about BGP is on wikipedia

They're used in other aspects of games too: AI is often state-based; transitions between menus and levels, and transitions upon death or level completed are often well modelled by FSMs.

The CSV parser used in the jquery-csv plug-in

A regex tokenizer is used to evaluate the data on a char-by-char basis. When a control char is encountered, the code is passed to a switch statement for further evaluation based on the starting state. Non-control characters are grouped and copied en masse to reduce the number of string copy operations needed.

The first set of matches are the control characters: value delimiter (") value separator (,) and entry separator (all variations of newline). The last match handles the non-control char grouping.

There are 10 rules that the parser must satisfy:

Note: The top 7 rules are derived directly from IETF RFC 4180. The last 3 were added to cover edge cases introduced by modern spreadsheet apps (ex Excel, Google Spreadsheet) that don't delimit (ie quote) all values by default. I tried contributing back the changes to the RFC but have yet to hear a response to my inquiry.

Enough with the wind-up, here's the diagram: 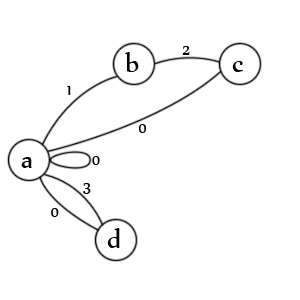 Note: It's actually missing a state. There should be a line from 'c' -> 'b' marked with state '1' because an escaped second delimiter means the first delimiter is still open. In fact, it would probably be better to represent it as another transition. Creating these is an art, there's no single correct way.

Note: It's also missing an exit state but on valid data the parser always ends on transition 'a' and none of the states are possible because there is nothing left to parse.

The Difference between States and Transitions:

A state is finite, meaning it can only be inferred to mean one thing.

A transition represents the flow between states so it can mean many things.

Basically, the state->transition relationship is 1->* (ie one-to-many). The state defines 'what it is' and the transition defines 'how it's handled'.

Note: Don't worry if the application of states/transitions doesn't feel intuitive, it's not intuitive. It took some extensive corresponding with somebody much smarter than I before I finally got the concept to stick.

Note: This is the gist, in practice there's a lot more to consider. For example, error checking, null values, a trailing blank line (ie which is valid), etc.

In this case, the state is the condition of things when the regex match block finishes an iteration. The transition is represented as the case statements.

As humans, we have a tendency to simplify low level operations into higher level abstracts but working with a FSM is working with low level operations. While states and transitions are very easy to work with individually, it is inherently difficult to visualize the whole all at once. I found it easiest to follow the individual paths of execution over and over until I could intuit how the transitions play out. It's king of like learning basic math, you won't be capable of evaluating the code from a higher level until the low level details start to become automatic.

Aside: If you look at the actual implementation, there are a lot of details missing. First, all impossible paths will throw specific exceptions. It should be impossible to hit them but if anything breaks they will absolutely trigger exceptions in test runner. Second, the parser rules for what is allowed in a 'legal' CSV data string are pretty loose so the code needed to handle a lot of specific edge cases. Regardless of that fact, this was the process used to mock the FSM prior to all of the bug fixes, extensions, and fine tuning.

As with most designs, it's not an exact representation of the implementation but it outlines the important parts. In practice, there are actually 3 different parser functions derived from this design: a csv-specific line splitter, a single-line parser, and a complete multi-line parser. They all operate in a similar manner, they differ in the way they handle newline chars.

There you go. OK, it's not brilliant, but it shows the idea.

You'll often find FSMs in telecoms products because they offer a simple solution to an otherwise complex situation.

I have found that thinking about/modelling a lift (elevator) is a good example of a finite state machine. It requires little in the way of introduction, but provides a far from trivial situation to implement.

The states are, for example, at the ground floor, at the first floor etc, and moving ground to first floor, or moving third to ground floor but currently between floor 3 and 2, and so on.

The effect of buttons in the lift cage and at the floors themselves provide inputs, the effect of which depend on both the button that is pressed along with the current state.

Each floor, except the top and bottom, will have two buttons: one to request the lift to go up, the other to go down.

OK, here's an example. Suppose you want to parse an integer. It would go something like dd* where d is an integer digit.

Of course, as @Gary said, you could disguise those gotos by means of a switch statement and state variable. Notice that can be structured to this code, which is isomorphic to the original regular expression:

Of course you can also do it with a lookup table.

One example of a FSM is a railroad network.

There are a finite number of switches where a train can go onto one of two tracks.

There are a finite number of tracks connecting these switches.

At any time, a train is on one track, it can be sent to another track by crossing a switch, based on a single bit of input information.

That's the behavior of a single compute node in a distributed system, setting up a link based communication scheme. More or less. In Graphic form it looks something like this: 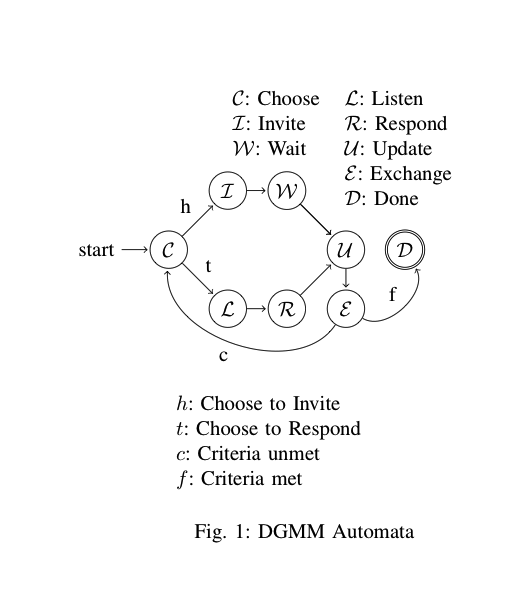 Check out this link for some simple examples of lexical analysis (FSM):

In practice, State Machines are often used for:

One example would be a State Machine that scans a string to see if it has the right syntax. Dutch ZIP codes for instance are formatted as "1234 AB". The first part may only contain numbers, the second only letters. A State Machine could be written that keeps track of whether it’s in the NUMBER state or in the LETTER state and if it encounters wrong input, reject it.

This acceptor state machine has two states: numeric and alpha. The state machine starts in the numeric state, and starts reading the characters of the string to check. If invalid characters are encountered during any of the states, the function returns with a False value, rejecting the input as invalid.

6
Good ways to jump to a particular state in a yielding stateful function?
2
Dependency injection with Finite State Machines and the Interface Segregation Principle
3
Is there a well defined notion of 'before' and 'after' in finite state machines?
5
Language to describe Finite State Machine
0
Finite State Vending Machine Diagram
1
State machine - how to handle outside environment values?
1
Do state machine based programs have a processing loop - or even exist?