I thought that Visual Studio 2010 SP1 would include support for using SQL Server Compact Edition 4 inside the designer, but it seems not.

Was I wrong, or has I managed to botch up my installation somehow?

I installed SQL Server CE 4 from the download page, not through the web installer.

If Visual Studio 2010 SP1 does not, and should not, include such support, what are my choices, if any?

Service Pack 1 for Visual Studio 2010 does include a graphical designer, although you need to install additional tools in order to enable this.

It's not as full featured as the experience of using SQL Server Management Studio against a "full" SQL Server or SQL Express database, but nonetheless when enabled it looks like this: 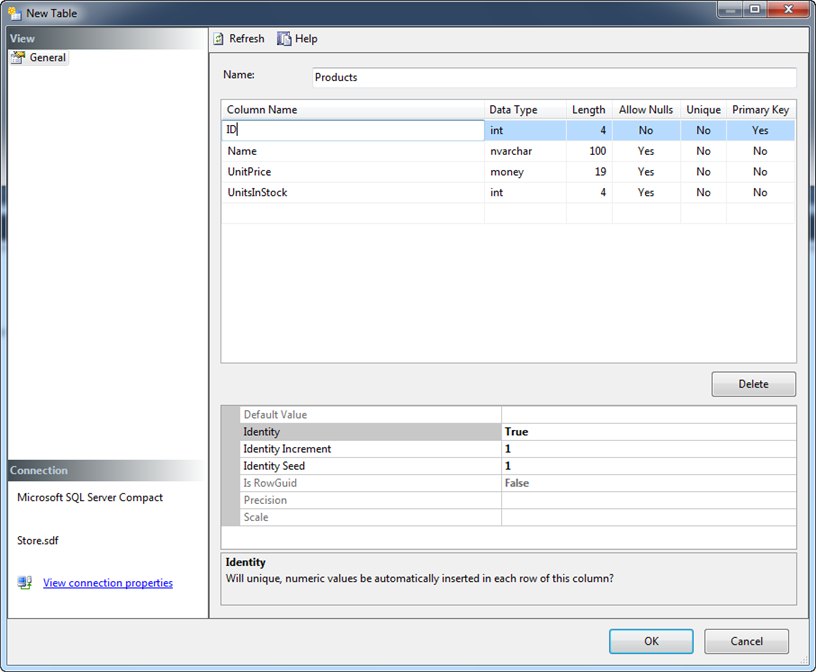 Scott Guthrie did a blog post regarding VS2010 SP1 and SQL CE a little while ago (when VS2010 SP1 was still in beta). In that post he points to an additional file that is required on top of VS2010 SP1 that enables the tooling support.

Once SP1 is installed, you’ll also then need to install the SQL CE Tools for Visual Studio download. This is a separate download that enables the SQL CE tooling support for VS 2010 SP1.

Hopefully, the SQL CE & Visual Studio teams will do a "refresh" of this additional tooling installation for the final version of VS2010 SP1.

We will also have a WebPI package available Monday that auto-installs VS10 SP1 and additional web goodies (IIS Express, SQL CE Tools)

The "Monday" he's talking about should be Monday 14th March 2011, so once that ships, you can download the SQL CE Tools and install them "on top of" the Visual Studio 2010 Service Pack 1, and you'll be good to go with all things SQL Server Compact 4.0 !

I've been using SQL CE Toolbox from that list which integrates with Visual Studio quite nicely.

EDIT: You can still use that, then script out the Tables and execute them against CE 4.0.

Not the answer you're looking for? Browse other questions tagged visual-studio-2010 sql-server-ce sp1 or ask your own question.