I have a code that I'd like to share, but I'd like to publish it using an open source license. But I don't know how you have to use that licenses.

How do you have to activate an open source license? Just including the text of the license in all files? What else do I have to do? Do I need to buy some right? Include a readme.txt in all the directories? I mean, what do I have to do if I want my code is protected by the legal test of a license?

The second question is what it is the better license for this conditions:

What is the best license to that purposes?

open-source licensing
Share
Improve this question
edited May 1 '13 at 7:34 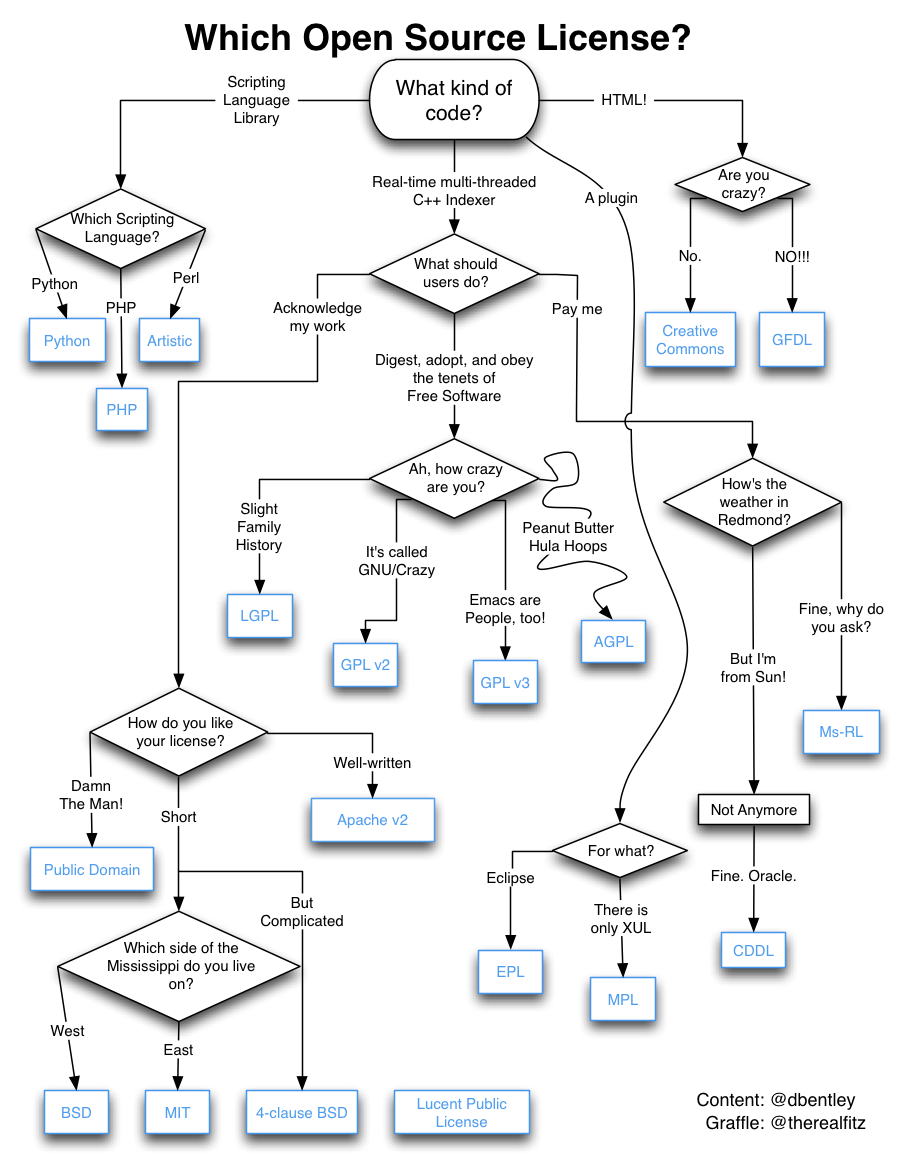 References to PDF and Graffle versions of above flowchart are available at Karl Fogel's blog.

Like most open-source licenses, it allows user to modify and redistribute the source. It allows them to use it for any purpose.

Unlike most modern OSI approved licenses, this one has so called "advertising clause", meaning that authors of software using your library must mention that their product contains code developed by you.

Text of the clause:

"All advertising materials mentioning features or use of this software must display the following acknowledgement: This product includes software developed by the <organization>. "

I am not a lawyer and the following is not legal advice, but what I've gathered about copyright law as a programmer.

The kind of license you want sounds like a copyleft, but weaker than the GPL. Consider the GNU Lesser General Public License (LGPL).

The Free Software Foundation has been very successful in pursuing litigation against people who have violated the terms of their open source license. I remember an article from ~2006 showing they were 4 for 4 at that time; more recently they have settled lawsuits against Cisco, Skype, and Verizon, all resulting in payments to the FSF. In general, however, the lawsuit begins only after repeated attempts to inform the defendant of their obligations has been made. So just to save time, require the user to click an 'accept' button in a standard license dialog, save the license terms file in its own 'license' folder, and you should be all set.

As far as the particular license to use, it sounds very much like you want the LGPL, which does everything you ask except possibly the attribution part--you might have to make that a separate stipulation.

I don't think there is a license that exactly matches your requirements. It sounds like you want some kind of mixture of the AGPL and the LGPL. But the FSF has not yet got around to creating such a license! You can see their official response here: https://stackoverflow.com/questions/3330792/why-isnt-there-a-lesser-affero-general-public-license/4419776#4419776

How do you have to activate an open source license? Just including the text of the license in all files?

I don't know what the exact legal requirement is, but normal practice is to include a small header comment at the start of each file:

What else do I have to do? Do I need to buy some right?

Include a readme.txt in all the directories?

No. A single README file in the root of the directory tree is a good idea, but not mandatory.

I mean, what do I have to do if I want my code is protected by the legal test of a license?

To be absolutely sure, talk to a lawyer.

(1) I don't care what people do with my code, educational purposes, to make money, I don't mind whatever they want to do with it.

That is kind of a non-requirement. Very few licenses forbid people from making money, use in education, etc.

However "do what they like with it" literally contradicts some of your other requirements.

The requirement that they provide the source code of any modifications that they make is present in GPL, LGPL, AGPL, but not in Apache, BSD, and other common licenses.

(3) But I want people don't delete my name from the code, and If they use my code force them to mention me.

Most licenses require attributions in the code to remain in the code.

However "force them to mention me" is difficult, and few if any licenses say that. Indeed the FSF position is that such a requirement makes your code non-free ...

(4) But I don't want to force people to publish the code of they applications, even if they are using my code.

Few licenses force people to publish the code of their application as a matter of course. Even the most radical of the GPL family allows you to use and modify software for purely private purposes.

Note also, that requirement (2) and (4) are literally contradictory.

Or maybe you should just talk to a lawyer. (He / she will obviously need to ask you a bunch of questions to elicit what your real requirements are.)

You can use whatever license you want (even make your own ) on the work which belongs to you (you have the copyright) this is usually done by including a copy of the license in the file COPYING along with the source code.

What you are looking for is XFree86 1.1 styled License (It which is a permissive non-copyleft license(no need to open the source if you use it but requires a acknowledgement) and satisfies all your requirements .

You can replace the xfree86 name with your name and distribute it.

5
Options for Opensource license?
0
FOSS licensing decision: What to read? What factors to consider?
0
Questions about software licensing
7
How should I implement my chosen software license?