We use XML files to describe entity relationships in our database schema, so they help us generate our ORM framework and HTML forms which can be used to add, delete, and modify entities.

To my mind, it increases code quality because human error is reduced. If something is implemented incorrectly, it is broken in the model, which is good because the error might appear sooner since more generated code is broken too.

Since I was asked for the definition of code quality, let me clarify this, what I meant is software quality.

Software Quality: It is not one attribute but many, e.g. efficiency, modifiability, readability, correctness, robustness, comprehensibility, usability, portability etc. which impact on each other.

Code generators cannot generate better code than the person who wrote the generator.

My experience with code generators is that they are just fine as long as you never have to edit the generated code. If you can hold to that rule, then you're good to go. This means you can reliably re-generate that part of the system with confidence and speed, automatically adding more features if needed. I guess that could count for quality.

I once heard an argument for code generators that a single programmer can produce so-and-so many lines of code per day and with code generators, they could produce thousands of lines! Obviously that is not the reason we are using generators.

I'd argue the opposite -- presuming you are writing interesting applications, code generation decreases code quality. The nature of code generation rewards very cookie-cutter, overblown, over-specified frameworks that become very hard to deal with without continually reliance upon the code generation tool to continually generate bigger, more complex, uglier bunches of code. While it can be a good tool, it really shouldn't be the primary tool in the box.

I think automated code generation and code quality are somewhat orthogonal and do not necessarily correlate.

Code generation is merely a way to solve a specific technical task. Whether it results in increased code quality very much depends on what you're doing.

Your situation is a good example of code generation resulting in increased code quality through early catch up of potential errors.

Code generation doesn't affect code quality, per se, so much as code consistency.

Code generation may also be used to build code faster. Faster, however, does not mean better... It could just mean you get your bad quality code that much quicker.

Code generation is good if:

When these are the case, the code whose quality you need to consider is the code that is input to the generator.

A simple measure of the quality is, for typical changes in requirements, how much manual editing do you have to do. The less, the better.

Increased code quality due to DRY (Don't repeat yourself).

The code generation rules are written once; they are not hard coded for every instance of code generated, and thus reduce the potential of human error in copy/pasting the content with slight modifications.

I'm assuming you mean proprietary code generators handrolled for specific in-house use since otherwise anything short of machine code is a code generator. But here you go: 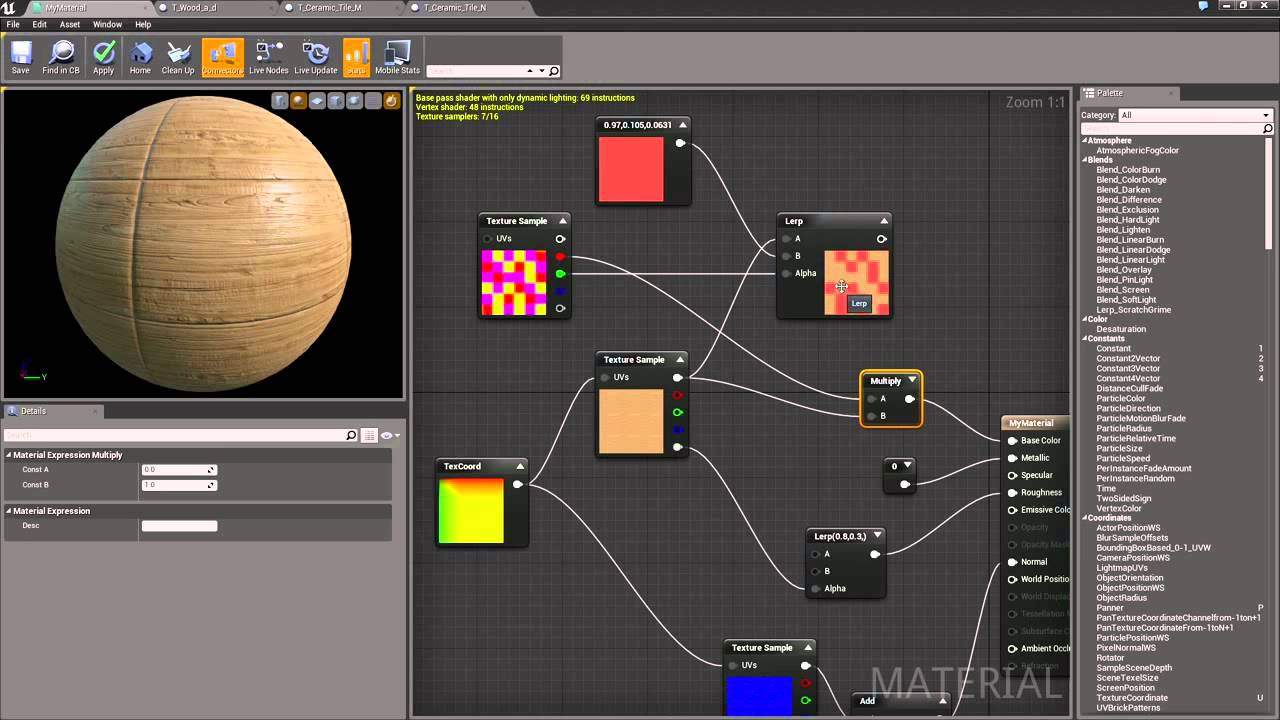 I think it's very arguable that the node graph in Blueprints is easier to maintain and far less error-prone than the GLSL/HLSL code it generates (and would have otherwise needed to be handwritten).

It's also so much more productive to come up with new shaders since you get a realtime visual feedback of how the end result looks like as you change the graph. I'd definitely prefer to maintain thousands of shaders represented with nodal graphs this way instead of GLSL/HLSL code, and I'm actually more familiar with writing GLSL/HLSL than using Blueprints. I think it's actually practically impossible to cause like a major bug besides maybe some minor visual glitch you'd probably catch right away because the "visual language" imposes sensible constraints with often a pure functional style that doesn't allow you to, say, crash a shader, at least AFAIK (I'm admittedly not an expert with Blueprints).

There's not even "code" to maintain anymore. You just place nodes inside a graph and draw links between them and, voila, it generates shader code for you. Who maintains this stuff and says, "You know, my life would be so much easier and I'd have so much more free time if this was just written in GLSL code instead of using Blueprints." Probably never.

That said, I have run into my share of proprietary code generators that did make life harder, making me learn this stupid meta language that has very limited benefits, if any, over writing code in the language of the code it generated. To me a tell-tale sign of code generation that's shite is one that does little more than reduce a small amount of boilerplate and doesn't actually reduce, say, the possibility of bugs. You know it's especially shite if it actually introduces new ways to cause bugs that the original language didn't have. But there are cases for code generation, like the above, where the productivity boost is so massive, rendering meticulous things that cost enormous time now cost pennies, that no one would ever use it and then look back.

To me there's a more legit argument for the proprietary development of Blueprints among the Epic team than many superfluous programming languages out there made for the general public which barely bring anything new to the table.

I would say in your case it might increase quality a little bit, but reduces development time by a lot. Sometimes the generated code is flaky, awkward, or just plain bad. In those cases, teh generated code can decrease quality and add more testing / fixing / regression testing time to the project. And some tasks are just too complex to be easily generated - the generator becomes a whole separate system (possibly bigger and more complex than the main project) unto itself.

Code generators are fine, but be careful with them!

I used to work in a shop that relied on code generation heavily. In my mind it made the code for the project very uniform. And in that respect, the quality was OK.

However, when you are no longer allowed to write custom code because everything has to go through the generator then I think you lose some of the edge of being a programmer.

So I think this is a double edge sword topic for sure. Yes generators are great because they reduce errors and increase code standards, however, they also make "some" of the programmers dumb, because they are reliant on the generators instead of having to get their hands dirty.

My main worries is metaqueries - queries on object's properties that the ORM translate to SQL using whatever algorithm. Very similar metaqueries can generate SQL that's completely different - and have no guarantee that this generated SQL is performatic.

A metaquery language that translates to another language (SQL) that translate to a query plan to effectively execute the data gathering. And the generated result must be objects, so the ORM must instantiate the affected objects - so it can trigger another rain of queries to fill the attributes of the objects not brought by the metaquery itself...

I totally agree with those who say that code generation is fine as long as you never have to edit (preferably, never have to look at) the generated code.

If we can accept that the generated code is approximately the same number of lines as hand written, and if we can say that it is bug free, then number of lines which might potentially contain bugs has decreased. Ergo, code quality ought to have increased.

Addendum: of course, other factors, such as execution time, may play a role.

Personally, I have written quite a few code generators, but never as an initial approach.

It has always been when I noticed a repetitive pattern in existing code, so my generator takes some existing code when adding new, but similar, code and parametrized some variable parts of it.

To that extent, my generated code is almost identical to existing hand-written code (except that it tends to better visually laid out and more uniform, which I find aids legibility, if it ever does have to be looked at).

Btw, I advocate inserting opening/closing comments which indicate that the code was generated, including details of the tool and its maintainer.

Not the answer you're looking for? Browse other questions tagged development-process code-quality quality or ask your own question.

2
Tracking feature requests for small-scale components
1
Is there a software attribute (like reliability) that describes a bug free experience?
2
What is the difference between Static code analysis and code quality?
9
How to implement a development process with college students