Are There Any Programming Focused Notebooks? [closed]

Ask Question
Asked 10 years, 9 months ago
Active 6 years, 2 months ago
Viewed 18k times
12
As it currently stands, this question is not a good fit for our Q&A format. We expect answers to be supported by facts, references, or expertise, but this question will likely solicit debate, arguments, polling, or extended discussion. If you feel that this question can be improved and possibly reopened, visit the help center for guidance.
Closed 8 years ago.

I know that engineering paper exists, but are there any companies that make programmer-specific notebooks for notes/pseudo-code/designs?

Paper is my preferred way of outlining things, so the addition of a specialized pad to my list of tools would be greatly beneficial.

They aren't necessarily programming focused (or economical), but I've found Moleskine notebooks to be pretty useful for programming notes.

I really like Moleskines. They work for me. I've filled up 2 so far with programming notes, and I'm going through a third. That said, I'm still looking for something that's almost as good but cheaper.

I'm hooked on computation books. These are bound books of graph paper with pre-numbered pages, and they totally rock. I buy 'em five at a time online, and use a new one every time I start a new project. 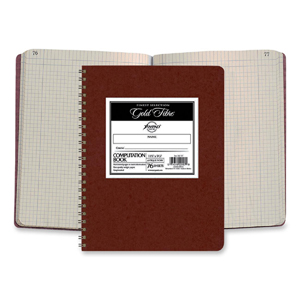 Having them bound keeps your notes together. And the numbered pages are great for intellectual property purposes. If you write the date down every time you start a new day's notes, not only can you find things in chronological order, but if you ever have to go to court about when something was invented, they make fantastic evidence.

They're also great for taking meeting notes. On one multi-year development project, I became the go-to guy even for the managers, because I had better notes than anybody and never lost them.

In the US, you can get good ones made by Ampad and TOPS. You can also get them with several kinds of bindings: stitched, "perfect" (glued), or wire rings. The glued ones will fall apart, so I avoid them. Stitched is great for the intellectual property stuff, so I use them when I think that could be an issue. But my preferred version now is the wire ring type, because you can open it flat.

The only disadvantage is they're expensive - about $15 each. A college lab notebook with graph paper pages might work, too, and it would be cheaper, but I don't think they're as sturdy and the pages aren't as big.

I'm a big fan of 8 1/2 x 11 yellow legal pads, personally. They sit flat on the desk; they're pretty thin, so you can write all the way to the bottom; and after I've filled a few pages and resolved the issues described in those pages, I tear them off, punch them, and put them in a 3-ring binder. It's a little elaborate, sure, but it beats having to fight with a notebook to keep it open.

I obsess over stationary and have been trying to answer this question for myself for ages. My favorite solution is a Rhodia wirebound graph pad with a Micron Pigma pen. Rhodia paper is superior to all I've tried and they have a number of size formats to suit your writing style. I also find a small architect's template to be handy for making diagrams. Both pen & pad are easily acquired in the US at any art supply store.

I've been working on this problem for ages, here are some thoughts. My problem is I love having little notebooks and a couple of coloured pens, for sketching, prototyping, making notes there's nothing quicker, but it's paper goddammit, and there's no undo.

For actual coding I use either a PC with a couple of 1080p monitors. I could get higher res or larger ones, but for the price would of shot up. I also use a Sony VPCZ1 laptop. It's 13" but also 1080p. It's actually a little too hirez for general stuff, but it works perfectly for coding.

To replace the notepads I've tried the following.

LiveScribe pen. This is a pen with an onboard computer. It watches what you write and records it as an image. It uses special paper, but you can print your own pads of the stuff so you're not tied to their stationary. It works pretty well, but it becomes a problem when brainstorming with people. If they don't use your pen you don't get their notes recorded...

iPad. I found using your finger just doesn't feel intuitive or accurate enough, so now I have an iPad stylus. It's about the size of a pen and helps. This is currently my preferred route for digital sketching.

Wacom tablet. Not portable, well it is, but it's not the sort of thing you want to carry or pull out in a meeting, on the train, etc.

laptop with touch screen. I've got an HP with touchscreen which you can swivel round to be tablet format. I actually don't like it, I can't put my finger on why, it feels a bit laggy perhaps, strokes with the stylus aren't recorded in sufficient resolution I think. The applications I used with it weren't optimised for stylus use either, unlike the ipad apps, so it felt more clunky than it should be.

Paper and pen + scanner and doc management software. I own a copy of PaperPort which I use for all my document management stuff, so it wasn't a killer step to scan paper pages and put them in there. Still a bit of a pain. I use the red and black series of hardback notebooks in a variety of sizes, everything from an a6 I keep in my jacket pocket up to A4. Oh I use the four colour bic biro pens. I like to use different colours :)

Edit: Oh one extra thing, recently I've started using an iphone app called jotnot or something like that. There are loads of them, all it does it process a photo for use as notes. I use that to photo notebook pages and then email them to myself.

I use graph paper notebooks and love them. They're hard to find in the US, but very common in Latin America. I picked up a taste for them in Ecuador, but my last purchase was from a Mexican Wal-Mart, where they were available for less than $1 each.

Not the answer you're looking for? Browse other questions tagged design tools efficiency or ask your own question.

7
What's the best way to do a Proof of Concept shootout?
4
Maintaining Organization When Designing Software
1
Filtering additions to a list
1
How do I improve my new Web Application design process?
2
Is there any point in a digraph implementation?