How do you track common, but rarely used code?

General OO teaches us to encapsulate and best practices teach us organization. So we end up with re-useable self-documenting code that relieves us of any details regarding implementation.

Over time these simple encapsulations turn into libraries. We may even have further classifications via Namespaces. This works very well in the same language. Especially when its a language the developer commonly uses.

But, I often run into situations, especially in lesser used languages, where I need to recall a simple common concept that may not actually be a class at all. For example, I don't write a lot of jQuery, but I write enough where I get tired of looking up the proper syntax for $(document).load...or is it

This kind of boiler plate code, which I understand well the purpose of, but lack the experience and regular usage of the language to remember the syntax is where my problem lies.

I have seen some developers write a blog to simply remember the idea. My usual approach is...

And this has usually been fine. But, I have also noticed that on SO, some of the top answerers, say Jon Skeet, seem to pull boiler plate answers very quickly...so quickly I wonder if they have built up some sort of reference material to quickly search and slap together this code on the forum, piecemeal or in full.

I would like to use this same concept (if it exists...) to store my "document.ready" snippets so that I may use them for my own coding.

So, does an effecient storage and lookup exist?
What is the best way to store and organize these irregular, but common useful snippets?

Bonus...its even more interesting to note how my coding approach does not lend itself well to white-board interviews (where we have no google, but are expected to write code). How do you handle this issue when facing the "lesser used" languages in your vocubulary?

I've been using TiddlyWiki for a while now to organize random notes. It's portable, self-contained and sort of blog-like.

an open-source single page application wiki. A single HTML file contains CSS, JavaScript, and the content. The content is divided into a series of components, or Tiddlers. A user is encouraged to read a TiddlyWiki by following links rather than sequentially scrolling down the page... 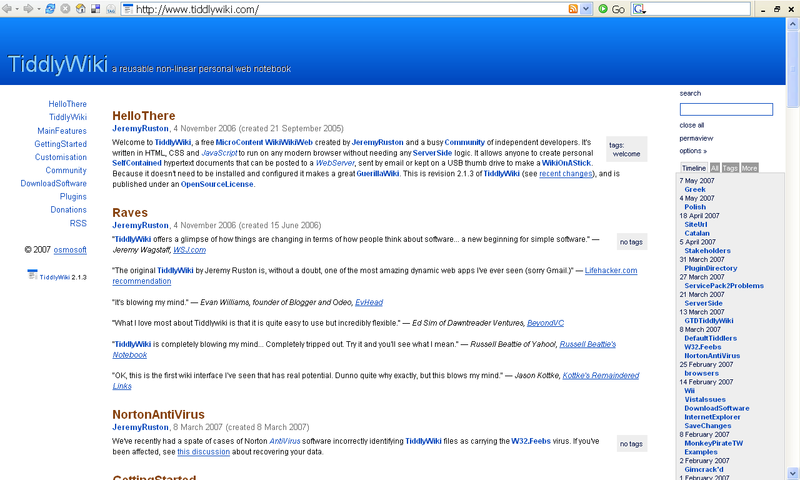 Personally, I use this newfangled technology called bookmarks. I have a folder on my bookmarks toolbar called programming, and folders within that by language or framework.

As for whiteboard interviews, the secret is that interviewers already know the answers to problems they pose, so you tell them your intention in pseudocode and just ask them about the syntax. "I know there's a jQuery function that gets called once everything is ready, but I have to write it so infrequently that I usually have to google the syntax. Care to remind me of the syntax, or do you get the picture from what I wrote here?"

In fact, when I interview someone I purposefully try to push candidates to that point, because their reaction to reaching the limits of their recall is much more instructive than their reaction to an easier test. After all, our whole job is creating things no one else has done before, including ourselves.

Whatever is searchable. I use Evernote with a notebook/folder for different languages. Doesn't matter if I'm at work, using a laptop, smart phone or home computer, the information is right there in an organized and better yet, searchable format.

I've switched to getting electronic books for programming. I can read them in multiple locations and keep them as a reference without dragging around thick books (Which I never do and use to just use Google.).

Not the answer you're looking for? Browse other questions tagged code-organization or ask your own question.