Is there a canonical book on mathematics for programmers? [closed]

Ask Question
Asked 10 years, 11 months ago
Modified 7 years ago
Viewed 48k times
51
votes
As it currently stands, this question is not a good fit for our Q&A format. We expect answers to be supported by facts, references, or expertise, but this question will likely solicit debate, arguments, polling, or extended discussion. If you feel that this question can be improved and possibly reopened, visit the help center for guidance.
Closed 9 years ago.
Locked. This question and its answers are locked because the question is off-topic but has historical significance. It is not currently accepting new answers or interactions.

Is there a book out there that's the de-facto standard for describing best practices, design methodologies, and other helpful information on mathematics for programmers? What about that book makes it special?

Hmm, from what you say it seems you want to start very basic. Nothing bad about that, I did the same. My math was mostly high school level and a lot of it forgotten.

Start with Khan Academy, go to the practice section and see how far you can get. This will give you a good idea what you can do and where to start learning.

Don't bother watching the videos. At least for me videos are just a slow way to learn and Khan's are extra boring. There are lots of other resources to learn basic maths. Like some of the WikiBooks or ck-12

The question is discussed on Math.StackExchange often enough and searching for 'free resources' or 'free books' will bring you a lot of information and material. Same goes for search terms like 'start' or 'beginner'. Or ask your own question there. That works as well in the /r/math subsection on reddit. There you will find more subreddits, eg for learning maths.

Practice a lot. It's not enough to just understand a concept and then go on to the next. You must feel comfortable to apply it. You won't understand percentages if you are not comfortable with division and multiplication (as an example). That is true for higher concepts too. That's why to me the practice section at Khan is far more valuable than the videos.

As with programming, staying in contact with the community will keep you motivated. Just logging in some forum once in a while and read what people are talking about.

Concrete Mathematics: A Foundation for Computer Science (2nd Edition) would be my choice for a good Math book covering various areas of Mathematics along with having some humor to the book that may be useful.

Paul's Online Notes from Lamar University comes in PDF Format. It's very good for quick referencing and there are examples on every page. If I ever wanted to refresh myself on a topic or grasp something, I tend to come back to this site.

Here is the set:

You can check the site for the rest of the topic listings.

I realize this isn't a book, but I think it might be a good way to broaden your thinking about mathematics. Try working through the Project Euler problems.

For example, the first one is:

I always recommend Kenneth Rosen's Discrete Mathematics and Its Applications. It covers a lot of different topics (as any good Discrete Math book will) with a good balance of theory and application. It also has many interesting sidebars on the mathematicians and computer scientists who originated the concepts covered.

While reading a 1000 discrete math book is a good solution, it might not be the optimal path if time is a constraint. If you want to have a flavor of how much math should you have with out going to deep, take a look in to the appendix A of the introduction of (cormen) Algorithm book: http://www.acmsolver.org/books/Introduction%20to%20Algorithms,%202nd%20Ed%20-%20Thomas%20H.%20Cormen.pdf

I read the appendix and it gave me a better grasp on what math topics should I review more. Once you know what to expect, take a look on: 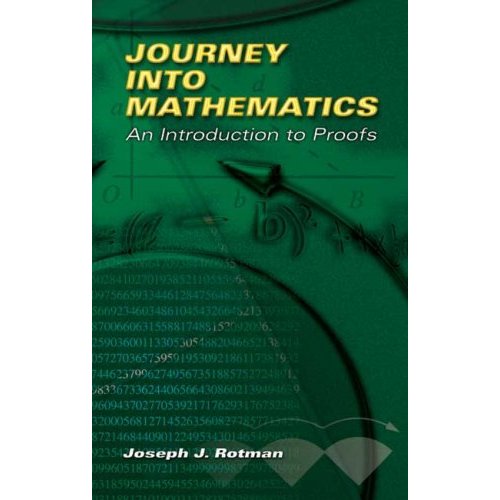 In my opinion, learning how to proof (especially by induction) is a cornerstone on understanding the analysis algorithms. Unfortunately, most algorithms and even CS math courses don't focus too much on proof. they already assume that your are a competent on it, so they don't go beyond a few pages. The Journey into math book is very small and easy to read. It uses CS problems and their mathematical aspect as well. Other good topics to learn is matrix arithmetic, probability, counting, and graph theory as well.

The other two popular big textbooks: Discrete Math and its application from EPP (my favorite) and the other one from Rosen.

I haven't got the pleasure of reading the textbook titled "Concrete Mathematics" but I always heard good things about it.

Frankly, you can be a perfectly adequate programmer in a lot of fields without a fundamentally very strong knowledge of mathematics. You may not be very capable when it comes to game engines or network routing optimization, but truth be told, lots of business applications are fairly simple. However, I would encourage you to keep hope alive and not yet give up on the math.

There's a world of difference between the math you take at a lower level and the math you take at a higher level. It's a very different thing to say that you're bad at Calculus (I was - I failed Calc I the first time I took it) than it is to say that you're bad at Graph Theory. As you advance through mathematics, the focus is not on simple problem solving that is frankly fairly boring and repetitive and might as well be done by your graphing calculator. Instead, the focus is on logical thinking skills: constructing proofs is frankly a lot like writing software.

The best math class I ever had was what I considered to be my first "real" math class: basically an introduction to proofs class that covered a range of areas from Graph Theory to Number Theory. The text we used was great (Mathematical Thinking: Problem Solving and Proofs by D'Angelo and West.) You may find it useful just to work through that book to get some ideas of attacking proofs.

Overall, did I really need any of the math I took in college? No, probably not. But having some formal background gave me better critical thinking skills, a better imagination (there are typically many ways to solve a problem, sometimes good, sometimes bad, but a unique idea can be helpful) and confidence in problem solving.

Look, I'm good at maths, but I really do not use it at all for programming, and I do program quite a lot. My advise would simply to get used to not know enough and have someone do the math for you.

There are so many things to know, you can't expect to be good at all of them, but maths in particular, it's not very useful.

Of course, you may need it because your programs are scientific something, otherwise use that time to learn something more useful.

Looking at the course notes of some of the (beginner) courses from the "Logic & Computation" section of ESSLLI (as an example, the upcoming 2011 program or the 2010 program, search for more) can be interesting. It will give you an impression about the current theoretical developments in the field related to programming. Then you can decide to study deeper the foundations in a certain subfield touched in those courses.

(Otherwise, it's difficult to answer your question, there is so much different "mathematics", which you might not really need or be interested in. One reason why the ESSLLI courses can turn out to be interesting for us is because they reflect some current research, so they are about solving certain puzzles; and trying to solve a certain puzzle is an important component in the process of a real understanding of a theory, of understanding what is the interesting thing behind it.)

If you are studying CS maths properly then you are looking at things like mathematical logic and set theory. These are have some fairly involved maths supporting them. Therefore if your basic level of mathematics is a bit ropey then you are best of starting with the fundamentals, before moving onto the more CS related areas.

Therefore I would suggest that you start with K.A. Stroud's Engineering Mathematics. Well written, easy to follow and covers the basics as well as more advanced stuff.

Start with the fundamentals and then move on to the specialized: Mathematician's Delight and How to solve it are two great books to start. Mathematician's Delight approaches fundamental math topics (eg. Geometry, algebra, calculus, etc.) in a human-friendly and amusing manner. I haven't read How to solve it yet but it focuses on how to attack math problems by reasoning.

Not the answer you're looking for? Browse other questions tagged math or ask your own question.

14
Recomendation for Math books related to computer science
4
Tried teaching myself to program before college, accidently overwhelmed myself, tips?