Should you bother with SVN branches if you only ever have one?

If we only work with one branch in Subversion, should we even bother? Can't we just work on the trunk to speed things up?

This is how we develop with Subversion:

When we want to release to production, we make a tag from the trunk. Bugfixes are made on a branch from that tag. This bugfix is then merged in the trunk.

This is why we make a new development branch after a feature is done. This way, the bugfix is included soon enough in our new code.

Below is a diagram which should clarify: 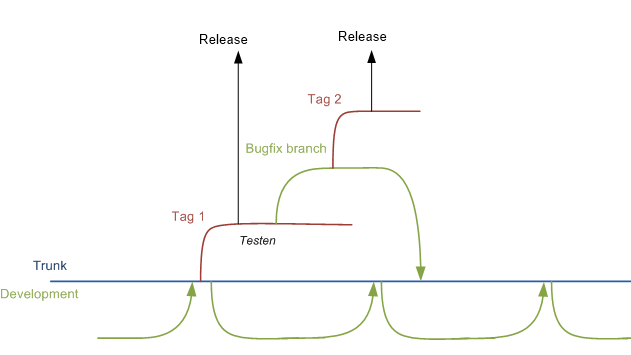 Now, there's a feeling this isn't the most efficient way of working. We build locally before we commit, which takes about 5-10 minutes. You can understand that this is experienced as quite a long waiting time.

The idea of a development branch is that the trunk is always release-ready. But this isn't true in our situation anymore. Sometimes, a feature is almost ready, and some developers will already start coding the next feature (otherwise, they would be sitting around waiting for one or two developers to finish and merge).

Then, when feature 1 is finished, it is merged into the trunk, but with some commits of feature 2 included.

So, should we even bother with the development branch, as we only ever have one branch? I've been reading about trunk-based development and branch-by-abstraction, but most articles I've found focus on the branch-by-abstraction part. I get the impression that's for big changes that will span over several releases. This is not a problem we're having.

What do you think? Can we just work on the trunk? Worst-case scenario is (I think) that we would have to make a tag from the trunk and cherry-pick the commits we need, because some commits/features aren't production ready yet.

IMHO working directly on the trunk is fine if you can commit in small increments and you have continuous integration in place, so you can ensure (to a reasonable extent) that your commits don't break existing functionality. We do that too in our current project (in fact I haven't worked in any project using task-specific branches by default).

We only create a branch before release, or if a feature takes a long time to implement (i.e. spans multiple iterations / releases). The rough size of a task can almost always be estimated well enough so that we know in advance whether we need a separate branch for it. We also know how much time is left before the next release (we publish releases approx. every 2 months) so it is easy to see whether or not a task fits into the time available before the next release. If in doubt, we postpone it till the release branch is created, then it is OK to start working on it on the trunk. So far we needed to create a task-specific branch only once (in about 3 years). Of course your project may be different.

What you are describing with your feature development is parallel development (simultaneous development targeting different product releases) and it does require branches to handle it properly. You could have one branch either for each release or for each feature if you often have to recompose the features that will make a particular release.

The other way to do this, would be to work out of trunk by default but create a branch if you expect your task to extend past the next release. You always tag the release of course.

Which approach you take really depends upon how much management you can do upfront. If the typical release doesn't really have parallel development then I'd take the second approach.

Not the answer you're looking for? Browse other questions tagged svn branching tagging or ask your own question.