What are the biggest differences between F# and Scala?

F# and Scala are both functional programming langugages that don't force the developer to only use immutable datatypes. They both have support for objects, can use libraries written in other languages and run on a virtual machine. Both languages seem to be based on ML.

What are the biggest differences between F# and Scala despite the fact that F# is designed for .NET and Scala for the Java platform?

PS: I love both Scala and F#, and hope they become predominant languages of their respective platforms in the future. :-)

One small but important points is the license: Scala is BSD (pretty much the most permissive free software license there is), F# used to be "Microsoft Research Shared Source license agreement" but is a commercial product nowadays (according to @Lorenzo below, although I couldn't find more specific license agreements anywhere).

this is also a good article on the topic: comparing-scala-to-fsharp

as always, best way is to try for yourself!

The very big difference to understand when checking functional languages is understanding language families and history, and know why ML language was invented and why Milner won an ACM touring award for it. 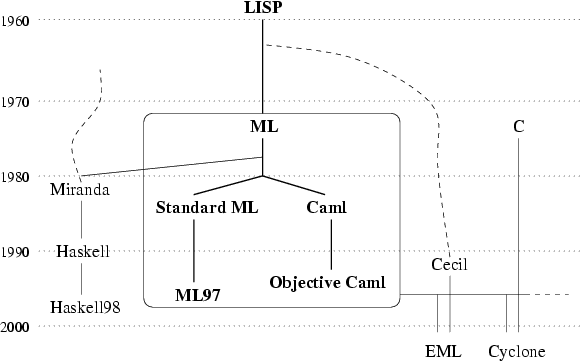 The Why is the ML type system. both F# and Scala are statically (strongly) typed languages, but the strongest differences in my view are:

Why is scala more popular?

A note on package management:

This lets you write "like python or javascript" and have strong typing like any strongly typed language.

43
Functional Programming on the rise?
5
Scala: From concept to working
1
Programming language with native concurrency support for large graphs?
3
Cross "Machine" Code?
5
Introducing functional programming constructs in non-functional programming languages
9
scalablity of Scala over Java
38
What limitations does the JVM impose on tail-call optimization
11
How will the new development of Java influence its interoperability with languages like Scala and Clojure?
5
Best way to handle language interoperability