the term endian or endianness refers to the ordering of individually addressable sub-components within a longer data item as stored in external memory (or, sometimes, as sent on a serial connection). These sub-components are typically 16- or 32-bit words, 8-bit bytes, or even bits.

I was wondering what "addressable" means?

For example, in C, the smallest addressable is a byte/char. How can a bit be addressable?

How can a bit be addressable?

The 8051/8052 family and some other microcontroller architectures (low and mid-range PIC, Infineon C16x/STM ST10) support bit-addressable addressing. In the 8051, the RAM bytes from 0x20 to 0x2f are bit addressable (128 bits in total). Also, many of the special function registers (SFR's) are bit addressable as well (in particular, those with byte addresses ending in 0 or 8 for the 8051 architecture). 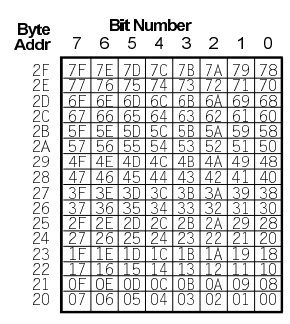 To support this, the 8051 has a number of instructions that operate directly on bits, such as set/clear/complement bit, jump if bit is set/not set, etc. These are much more efficient that loading up a general-purpose register and using AND or OR instructions.

For example, the instruction to set bit 3 of byte address 0x2A would be (the value 53h is found in the above table):

which is a 2-byte, 1 cycle instruction.

would compile into a single SETB instruction like the example above.

Regarding endianness on bit addressable machines, in general bits in a byte are labelled 7 to 0 (MSB to LSB), as in the diagram above. This is true whether the byte endianness is big endian like Motorola 6800, 68000 and PowerPC, or little endian like the 6502 family, Intel x86, and Amtel AVR.

Oddly, DEC minicomputers 50 years ago used the reverse notation: the PDP-8 numbered bits 0 to 11 (MSB to LSB). These machines were not bit-addressable however. DEC changed to the more common form used today when they came out with the PDP-11.

big-endian, little-endian refers to the order that the individual bytes are placed in the word. x86 is little endian, so for "1234" the lowest address gets the "4", and the highest the "1". Sparc is the other way around. MIPS can be either, and is set at startup time.

So, the answer is: Addressable means that there is a CPU instruction doing what you want. Higher languages can emulate more, but this rarely maps to simple CPU instructions.

If the system assumes that the address X points to the X-th bit of the memory, and that X+1 point to the following bit.

The addressable part is referring to sections of memory. For instance I sometimes work on an 8 bit system. Addressing is 16 bits. So the memory could be something like this:

You can only address 8 bits at a time so I could only write to one of the three addresses. The max I can write is 255 (0xFF) and the minimum is 0. If it were a 16 bit system I could write 256 (0x100) to the second address and it would do something like this to the memory:

The layout would differ depending whether the system is little or big endian.

Addressable refers to the size of memory you can write to at one point in time.

If something is 8 bit and you would only want to address the 1st (or 2nd or nth bit or whatever) you would have to write to the memory address that contains the bit you are looking for and write the value you want but only altering the specific bit.

If you wish to alter the second bit, you would have to read the value at this address and flip the bit and then write the new number back to the address. I'm not exactly a pro at C but something like:

That would read the value at Address 1 (assuming address_1 is a pointer to it), flip the second bit, and then store the new value back in the memory address from which it came.

"addressable" is used because data is stored in memory and depending on the computer architecture memory can be word addressable or byte addressable etc. (describing how data in memory is accessed).

For instance, byte addressable memory, as in the case of the 68K architecture, has memory addresses that correspond to a certain byte in memory.

Furthermore, a word is made up of a certain amount of bytes. Big endian/Little endian notation simply refers to the arrangement of bytes within a word.

For instance, Big endian notation has the most significant bytes addressed by the lower memory address:

lets say we want to store B2F6 in memory and our memory is byte addressable with 2 bytes in one word, then:

'Addressable' means a size of memory that can be addressed individually. This is typically a byte, which is 8 bits. Individual bits within a byte are not addressable. To access individual bits, bit-masking or bit-shifting can be used to remove all but the required bit within the overall byte. Endianness affects the order of storage of individually-addressable bytes within a larger memory block, which is typically 32 bits or 4 bytes (a word).

Not the answer you're looking for? Browse other questions tagged c memory or ask your own question.

2
How does the CPU access the values of stack-allocated variables?

3
strategies to keep tabs of memory leaks in non memory-managed languages
3
Given that I voluntarily choose not to implement virtual memory in my kernel, how would the memory-management-unit work?
20
How important it is to fix memory leaks?
29
Can anyone explain representation of float in memory?
2
Is an Array Index content stored in one memory address?
1
Does each process have it's own section of data, text , stack and heap in the memory?
4
How is memory unsafety generated, found, exploited and fixed?
1
How to check data has been received correctly with CRC - much confusion here