Are design patterns generally a force for good or bad? [closed]

I tend to fall closer to the former camp, but recently I've been seeing designs where nearly every single interaction is replaced with an observer relationship, and everything's a singleton.

So, considering the benefits and problems, are design patterns generally good or bad, and why?

Design patterns are a language, not advice to write program or a contract. Their primary use is an a posteriori explanation how a component or a system was (or is going to be) implemented. Instead of going into too much details, you can just say a couple of words that can describe the implementation well enough for the listener to understand how it works and what was important in it.

Alex: Hey, how are the config files created?

Bob: They're generated by a factory, which resides in config.h.

Now Alex knows that creation of config files involves non-trivial preparations, because otherwise their creation wouldn't be enclosed into a factory.

However, if Bob was a pattern-headed phony, and just used patterns here and there, Alex couldn't tell anything about config creation, because Bob used factory just everywhere. This would also lead to excessive complexity in the program.

So, program first, then spot patterns in your code, not vice versa. That's how they're effectively used.

Design patterns are great. When used properly they make code more maintainable, easier to read and work with. Part of being a good programmer is knowing when to stop and see that any further refactoring will outweigh benefits. Using design patterns alone doesn't make somebody a good programmer, but knowing when and where to use them does. Just like with anything else in this world design patterns can be taken to extreme and be abused. I know I'm still looking (and will be for a long time) for that perfect balance in my code where every design pattern has a purpose and falls into place perfectly just like a piece of jigsaw puzzle.

It's useful to remember that the idea of design patterns originated in architecture. Architecture can vary wildly. However, there are many core ideas that are present in any building. In this way, think of patterns as building blocks of design. It is important to note that not every building includes all possible architectural patterns.

Say you're designing a house. Rather than having the front door open onto the street, you want a sheltered area before entering the house, i.e. an anteroom. This area will fit a certain pattern. Namely, it will have two entrances, some walls and probably a roof. Note, the pattern does not specify doors, windows or how many walls. In most implementations, there will be two doors, four walls and maybe windows. However, the pattern describes an enclosed area with two entrances. One leads into the anteroom itself from outside of the house and the other leads into the rest of the house. The key here, is that if you want an anteroom you must enclose an area and provide two entrances into that area.

The typical problems with design patterns in programming are over use and the belief that they are silver bullets to fix any issue. They are not. They are ways to communicate and think about useful programming ideas. If the bits of syntax of a particular language are the bricks and mortar, patterns describe useful ways to arrange them to meet a certain needs.

I consider design patters more of "advice" than an unchangable contract that absolutely must be followed. Why? Precisely for the reason you mentioned. Following a design pattern in everything leads to a big mess of code that defeats the purpose of using a pattern in the first place.

This is why I hate sites like Java Practices. Sure some of the idea's are good, but then the author decided to write an entire program (plus a framework) following every single design pattern he mentioned. The author also wrote every article with big scary quotes making the reader think that actual java practices are horrible and should be avoided like the plague.

Also seet this thread on SO. From another POV design patterns are boilerplate code to compensate for the shortcomings of the used methodology. I am not a fan of celebrating those workarounds too much.

Understanding the relationship of patterns and seeing a pattern in a project (while at the conception stage) is what will make you a good developer.

It's often said that design patterns provide a ready-made solution for programming problems. What kind of problems are they? "How can I change object behavior, but isolate the changes from the rest of the system?"

The GoF patterns are recognized for providing that isolation (encapsulation) from the rest of the system, but it's often difficult to know what part of the system is given variability through the use of their design patterns. Instead of following the classification scheme they proposed (creational, behavioral and structural), I charted the patterns' differences and came up with two other schemes to classify their patterns: lifecycle and component encapsulation hierarchy. 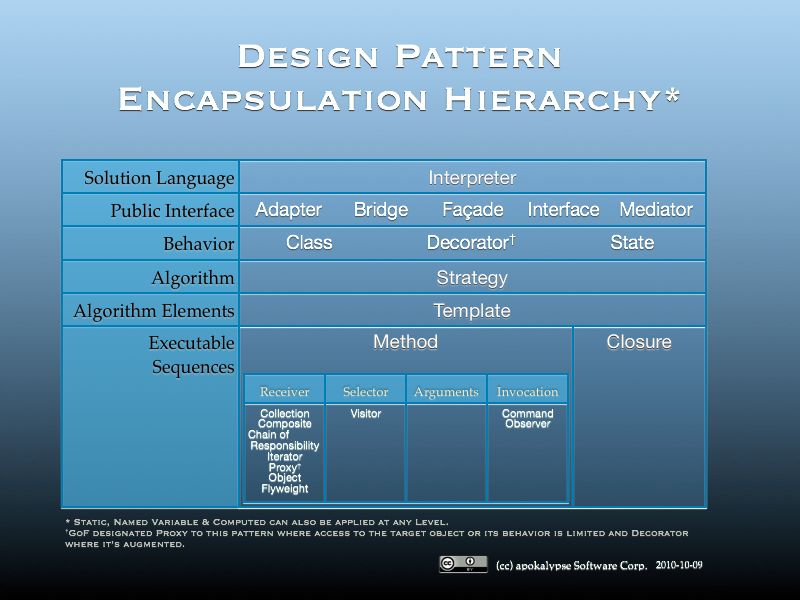 As you can see from this table for the encapsulation hierarchy, design patterns can be applied at every level of a component. But would it make sense? Will the component need to provide behavioral variation at the encapsulation level proposed, and is the proper pattern used for that level? If these questions aren't properly answered then design patterns are most likely misapplied. Just because a vertical pivot could be built into the cabin of a car doesn't make it a smart idea.

Using an analogy to money, a design pattern should be thought of as a solution with high capital cost but low operating costs. Design patterns cost a fortune upfront in terms of extra coding, verboseness and the conceptual weight from the extra indirection they create. They also have a tendency to lock down other aspects of your design. For example, using template method forces you to program in a heavily OO style.

However, if you need to solve a lot of closely related problems that vary in some small ways, or are definitely going to need to modify a piece of code heavily in some specific ways in the future, the upfront costs can be worth it because design patterns add flexibility to your code. The modifications or the solution to the second of your set of closely related problems will be a lot easier with patterns than without.

Both camps are correct - they're a force for good when used correctly, a force for bad if they're splattered all over the place.

Design patterns can have a knack of drawing you in, but the same is true of coding in general. It's easy to get seduced by writing the ultimate tool box - you've just got to keep YAGNI in mind to stop you getting drawn off course, get a feel for how much structure the application needs. IMO this is just down to the individual and a mark of their experience/judgment.

I think of design datterns not of something that you're constantly trying to apply to your code. For me it is mainly about a common language for developers. It's easier to say "we follow a builder pattern" than explaining the whole thing over and over.

I'm currently re-reading Patterns Of Enterprise Application Architecture right now, because I stumble upon a lot of code that follows one of the patterns from that book. I don't think it was intentionally chosen to follow one of the patterns, but it definitely helps if you can say "it's a transaction script" and everyone has a clear understanding what that means.

But I like the idea that you can choose from a prepared catalog of patterns, when you design a new functionality or a brand new application. Why reinvent everything if there are proven solutions for certain problems?

Not the answer you're looking for? Browse other questions tagged design design-patterns or ask your own question.