Where are octals useful? [closed]

I just banged my head against the table for some 20 minutes looking at a totally weird bug in PHP, and then I realized there's octal. The <%(*&#> octal.

In short, I padded some literals with zeros so the code would be aligned, I know, big mistake. Forgot about octals.

The question is, does anyone use octals for anything other than file permissions? (I personally prefer chmod ugo+rwx but I understand that if they have to be programmaticaly generated, it's useful to use octals.) But are they useful in any other situation?

Current uses, however, include:

Note that modern programming languages sometimes don't support octals anymore because of the lack of use-cases and the potential for bugs. C# is an example, as Eric Lippert wrote this in the TCPL 3rd and 4th edition:

C# does not support octal literals, for two reasons. First, hardly anyone uses octal literals these days. Second, if C# supported octal in the standard "leading zero means octal" format, then it would be a potential source of errors. Consider this code:

Clearly this expression is intended as a decimal literal not an octal literal.

Related, and just for reference and curiosity, Code, The Hidden Language of Computer Hardware has an excellent easy-to-follow explanation on octal and other number systems on page 55 - 63.

Octal was widely used some 50 years ago by Digital Equipment Corp. (DEC) and other companies that had computers with a 12-bit word (e.g. the PDP-8) or other multiples of six, such as 18 and 36 (e.g. UNIVAC 1108). I used both the PDP-8 and UNIVAC 1108 in grad school. Characters in both machines typically used six bits, not 8.

When DEC came out with the 16-bit PDP-11, they continued to use octal in their documentation instead of hexadecimal as used by the other minicomputer manufacturers coming out with 16-bit machines at the time. This was probably because of the multiple 3-bit fields within the PDP-11 instruction formats like Register, Mode and Src/Dest which lent themselves to be decoded as an octal digit. (Thanks to John Strohm for pointing this out.)

Interestingly, when Motorola came out with their 68000 microprocessor, which was heavily influenced by the PDP-11 and had the same 3-bit Mode and Register fields in the instructions, they chose to use only hexadecimal in their documentation.

Because the PDP-11 used octal notation, the original permission codes for Unix, which first appeared on the PDP-11, also used octal. This legacy persists in Linux, where the chmod command still uses octal to specify each of the three bit 'rwx' fields.

Some more trivia -- CompuServe, which was a widely used dial-up online service in the 1980's and early 1990's (before being overshadowed by AOL), ran on DEC minicomputers, at least originally. All user ID's were numeric, and at some point I made the observation that they never included any 8's or 9's in them, thus they were in octal. My old CIS ID was 70205.

Heathkit used them for the front panel of their H-8, and for assembly language listings of their front-panel software (called PAM-8). Dating myself, I know. 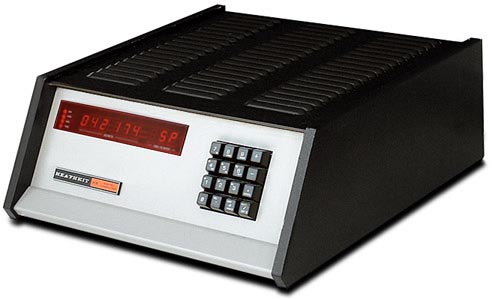 Nowadays octals are very rare; everyone seems to use hex. But numbers still look like numbers in octal, and you don't need an additional row of keys for the digits A through F.

One of the reasons why octal sees use is because it's the largest base that is a power of 2 for which you don't need any special characters -- that is, all digits can be numeric. Base 16 (the next one up from base 8) requires non-numeric digits (usually A,B,C,D,E,F).

I use octal every day. Every time I need to chmod a file I use octal (I pre-date the u+r notation...). Every time I want to embed a control character inside a string I use octal... (Yes, I could use hex, but octal is what I use).

Anybody who needs to express combinations of bits grouped in threes.

Why does anyone use hex?

Things off the top of my head that are expressed as octal numbers:

Back when I worked on CDC mainframes (with a 60-bit word, 12-bit word for the PPU), all the core dumps and such were done in octal (20 octal digits per word, 4 per PPU word).

Like hexadecimal, octal notation is sometimes used to specify character codes. It can be handy for the same reason that hexadecimal is: it's more compact than binary, but very easy to translate to binary in your head.

Like Hex, Octal numbers are easy to convert from binary. Just group the binary digits in groups of three, starting at the right.

Nope. Never used them. Not even for setting file permissions, because I do it so rarely I find it hard to read.

So yes, there is the obvious benefit of conversion from and to binary.
However, as already pointed out by @Mason, hex is far more "natural", because 2 hex digits make one byte. Comes in handy to represent 24/32 bit RGB/ARGB colors, IP addresses, byte masks etc. Octal on the other side is not really practical, because you rarely have scenarios where you work in terms of 3-bit groups.

File permissions are in fact the only thing I could think about. And if there's no area of use as of now, I doubt there will ever be one. Since the last 20 years space has become so cheap, it has become very uncommon to pack information so tightly, at the cost of alignment, ease of use and extensibility.

A bit of an aside, but a public use is on the London Underground. Each train has both a physical identity, and a separate identity in the schedules which is displayed when in service - see here: https://upload.wikimedia.org/wikipedia/commons/4/49/LUL-S-Stock-at-Watford.jpg (note the 402 at the top of the destination display). Although the electronics for the displays are bog standard decimal-based, you never see digits 8 or 9 because they are tied to legacy octal-based hardware in the signalling system.

Not the answer you're looking for? Browse other questions tagged octal or ask your own question.

2
Which numeral systems are useful in computer science?