MongoDB: Two documents of separate types that reference each other

I'm writing the back-end for a chat application. The database being used is MongoDB, which uses objects that have their own unique IDs.

I've run into a problem; I have two document types, channels and users, and said types need to reference each other.

The user object needs a list of channels it can participate in, and the channel object needs a list of users that are participating. Without these two objects becoming accidentally desynced (a channel object having a user in its list whose own channel list does not include said channel, vice versa), how should I go about structuring the database without sorting through every user and channel every single time I need to get a user list or channel list?

I've previously tried the below model: 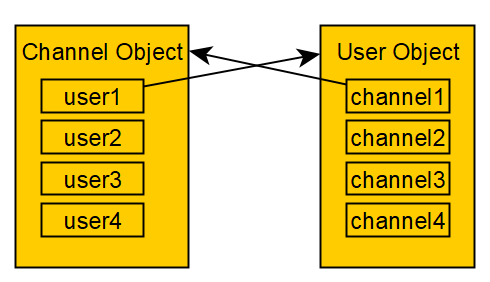 Why are there two copies of the state?

Hmm, why would the User need to hold a list of channels its participating in? This is not objectively state of the user, but of the situation that the user is in. It does make sense for a channel to be aware of Users, if only because a channel to no-where makes little sense.

My first thought would be to remove the channel list from the user. If you need to list up all channels, mongo does provide indecies over multi-valued properties of the document collection.

Two copies. What can be done?

If for whatever reason the channel list must exist in the user document and an equivalent user list in the channel, I would apply double-binding, or half-binding.

In Double binding both the Channels in the User, and the Users in the Channel must be verified against each other. Should both documents concur that a Given user is a member of a given channel, then the user is a member, otherwise its not. Unfortunately this requires N documents for verification.

How about Three documents?

Considering that these two lists essentially represent the same data from different perspectives, why don't you model it as a relationship? Create a document that binds a user to a given channel. Deleting the document is atomic.

Its relational, so why not a Relational Database?

While I know the fashion these days are for document stores, there is something to be said about transactions in relational stores when it comes to relational data.

Not the answer you're looking for? Browse other questions tagged database mongodb or ask your own question.

5
Structuring database for multi-object “activity” and “following” functionalities
2
Where to store front-end data for “object calculator”
0
Planning complex Mongo (And possibly other NoSQL) Databases
2
MongoDB schema for tracking matches
2
Beste practice: ORM (in PHP, but general): Save changes to database directly or on request?
1
Votes database architecture
1
Should be using MongoDB lookup or bulk update the data?
1
Database structure for an app used to capture data in warehouses