I'm having trouble with modeling the association between movies and DVD disks - it's my homework for university.

Is my diagram correct? 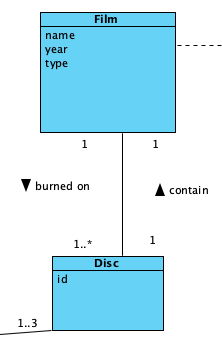 Perhaps the second option is beeter? 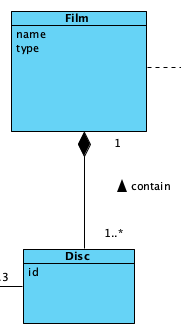 Both bullets belong to the same association between the "Film" and "Disk" classes and they tell us something about the multiplicities at each end of the association.

It is a single association, because the questions "Which disks is this film burned on?" and "Which film is burned/contained on this disk?" are asking for the same real-world information, just from slightly different starting points.

That makes your second diagram better, as it shows only a single association (with a single set of multiplicities).

To present the role name and multiplicity in UML association, your example should be modelled as the picture below: 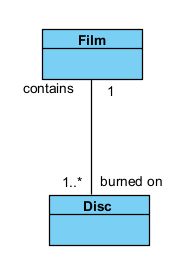 I used association because I don't know if this association is a composition or an aggregation. See more at https://www.visual-paradigm.com/guide/uml-unified-modeling-language/uml-aggregation-vs-composition/